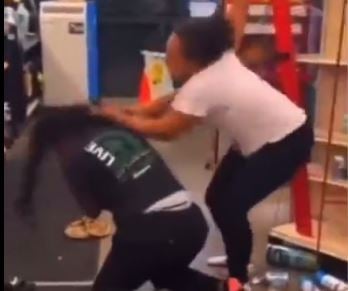 She won’t do that again. An irate woman was filmed attacking a store clerk at an O’Reilly’s Auto Parts Store in Dayton, Ohio.

That’s when the clerk went to grab a gun and shot the angry customer.
She proceeded to kick the woman on the floor.

It had something to do with “her mama.”

There is no word on the cashier’s current employment status.

The employee wasn’t taking that L

According to Montgomery County Regional Dispatch, the female victim was taken to Miami Valley Hospital by a personal vehicle, and had already left the scene by the time Dayton Police officers arrived.

Dayton Police crews are still on scene and the incident is still under investigation. No suspect is in custody at this time.

The post Clerk at O’Reilly’s Auto Parts Shoots Customer after the Woman Pulled Her Over Counter and Beat Her A$$ and Talked About Her Mama (VIDEO) appeared first on The Gateway Pundit.