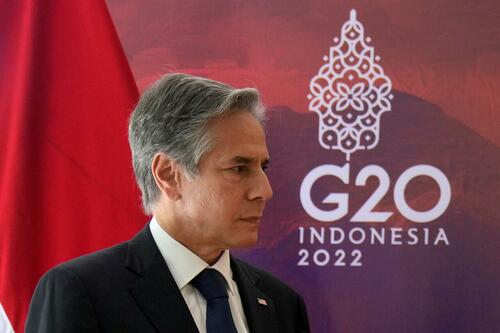 We detailed earlier that Russian Foreign Minister Sergey Lavrov stormed out of a meeting of G20 foreign ministers in Bali, Indonesia on Friday, citing that other countries had grown distracted through “fevered” condemnation of Russia for its Ukraine invasion.

The United States’ criticism at the meeting centered on stalled global food supply, with Secretary of State Antony Blinken using the occasion to demand that Russia open up ports and let the grain out of Ukraine. “To our Russian colleagues: Ukraine is not your country. Its grain is not your grain. Why are you blocking the ports? You should let the grain out,” Blinken said before top diplomats in closed-door talks meant as preparatory to the annual G20 heads of state summit which is set for November.

Blinken issued scathing criticism of “unprovoked and unjustifiable war of choice” at the meeting, but a defiant Lavrov said he wouldn’t “go running” after US representatives for the sake of talks. Blinken had vowed alongside French and German top diplomats to find “ways to address the global food security concerns that have resulted from Russia’s deliberate targeting of Ukrainian agriculture.”

Lavrov addressed the complete lack of communication or diplomatic contacts between Moscow and Washington by asserting, “It was not us who abandoned contact, it was the United States.”

Host country Indonesia’s message to both the US and Russia, and to the Ukrainians, was that negotiations must urgently be held to bring the conflict to a close.

Friday’s meeting was the first time Lavrov and Blinken attended the same event. But given the very visible shunning of each other, it’s not looking like there will be bilateral dialogue over the war anytime soon, also as President Vladimir Putin has appeared to ratchet his rhetoric amid steady Russian military gains in the Donbas.

Meanwhile, Putin on Friday in fresh remarks warned Russia’s energy industry to brace for an oil embargo from Europe. Putin reiterated familiar themes, including that Europe essentially ‘shot itself in the foot’ by years of obsessing over the green agenda.

As for Ukraine’s blocked wheat exports, Russia’s position has remained that port and vessel transit blockages are primarily due to Ukraine’s military mining their own ports, which Kiev says was necessary to thwart the major Russian force invasion.

At the G20 foreign ministers’ meeting, of note is that China, India and Brazil were among those refusing to join the chorus of Western condemnation aimed at Moscow:

“The nations in attendance [at the G20] were divided about how to respond to Russia’s invasion of Ukraine, with major powers like India, China and Brazil unwilling to join in the Western-led sanctions against Moscow….”https://t.co/Cq6UmJCaVS

“The nations in attendance [at the G20] were divided about how to respond to Russia’s invasion of Ukraine, with major powers like India, China and Brazil unwilling to join in the Western-led sanctions against Moscow,” The New York Times underscored.