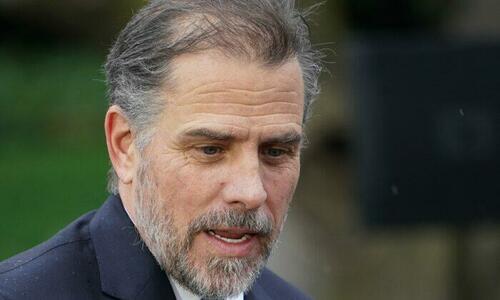 Authored by Eva Fu via The Epoch Times (emphasis ours),

In a letter on July 6, Rep. James Comer (R-Ky.), a ranking member on the House Committee on Oversight and Reform, asked Yellen to provide reports of what he thought was “suspicious activity” on the part of the younger Biden, his business associates, and other Biden family members.

Hunter, the second son of President Joe Biden, is currently under federal investigation for potential tax violations. Scrutiny has been growing over his overseas business dealings in countries such as Ukraine, Russia, and China, particularly during the period while Biden was vice president in the Obama administration.

Comer previously wrote to Yellen in late May requesting the SAR reports for Hunter Biden but received no answer. He accused the Biden administration of restricting Congress’s access to SARs, citing a recent Treasury Department rule that allows Congressional staff to review such materials in a Treasury reading room. They are barred from making copies of the documents.

“Committee Republicans are investigating whether this change in longstanding policy is motivated by efforts to shield Hunter Biden and potentially President Biden from scrutiny,” the letter read.

“Despite Treasury’s assertion in the press that it ‘provides SARs to Congress in a manner that enables robust oversight,’ Treasury is refusing to release SARs connected with Hunter Biden or his family and associates—including the President,” Comer wrote in the letter.

He noted that in a phone call on June 13, five days after the June 8 deadline for Comer’s request, Treasury officials told Republican staff on the House Oversight Committee that “they will not provide SARs to Committee Republicans unless Democrats join the request.”

That marked a contrast with the Treasury Department statement shortly after Comer’s initial request.

“Treasury has made SARs available for every request we’ve received, regardless of party, and will continue to do so,” the department told Wall Street Journal at the time.

“It is troubling that the Biden Administration is willing to provide a false story to the media to create the appearance of transparency, while continuing to thwart congressional oversight,” Comer said. “Treasury’s actions call for investigation and raise new questions about the degree to which the Biden Administration is using the federal government to provide cover for the Biden family and its associates.

“The American people deserve to know whether the President’s connections to his son’s business deals occurred at the expense of the United States’ interests and whether they represent a national security threat.”

Comer’s inquiry to over a dozen banks in May, including the Bank of China, Cathay Bank, and JP Morgan Chase, also didn’t receive any responses.

The banks said they cannot provide the requested materials without a subpoena, Comer’s office told The Epoch Times.

Hunter in 2017 and 2018 received millions in payments from Chinese state-linked companies, according to recently released bank records. Emails from what is alleged to be his abandoned laptop also show him trying to broker a $120 million oil agreement between a Chinese state-owned oil company and Kazakhstan’s prime minister at the time.

Biden has in public repeatedly denied having discussed with Hunter about the latter’s foreign business transactions. But a leaked voicemail, dating back to December 2018 and recovered from the laptop that Hunter allegedly left in a Delaware repair shop, contradicts his claims.