The One Commodity That Won’t Stop Soaring

The One Commodity That Won’t Stop Soaring

While crude oil and other commodity prices have plunged in the past week amid growing fears of recession and less liquid markets in the summer, one commodity is bucking the trend and continuing to rise – European natural gas.

Benchmark gas prices in Europe at the Dutch TTF hub hit their highest level in nearly four months earlier this week. Prices have shot up by a mind-blowing 700% since the beginning of 2021. And we likely haven’t seen the biggest rally yet, analysts say.

Gas prices started soaring amid the energy crisis in the autumn of last year. Then the crisis reached a whole new level after the Russian invasion of Ukraine in late February, which prompted the E.U. to race to replace as much Russian gas supply as possible, while Russia slashed deliveries to major customers—including Germany and Italy—in the middle of June. In the three weeks since Russia reduced supply to Europe and an outage at the U.S. Freeport LNG facility halted exports, European gas prices have jumped by 60%.

The front-month TTF futures contract surged by 8% to $179 (175 euro) per megawatt-hour (MWh) on Tuesday, hitting the highest level since March. The price is five times higher than at this time in 2021. That’s also more than 11 times above the long-term average, according to Ole Hansen, Head of Commodity Strategy at Saxo Bank. The European gas price surged to an equivalent of $300 per barrel of crude oil, Hansen noted.

[ZH: For context, the following charts compares – on an oil barrel equivalent basis – EU NatGas, US NatGas, and WTI Crude. EU NatGas is trading at triple the cost of US NatGas…] 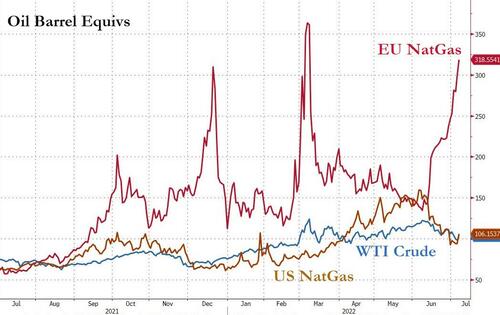 Meanwhile, other commodities, including oil, have slumped since mid-June as the Fed and other central banks hiked key interest rates by the most in decades to fight the highest inflation in more than 40 years, inflation that was exacerbated by surging energy and fuel prices. The aggressive rate hikes heightened fears in the equity and commodity markets that a recession is looming.

Significantly lower gas deliveries from Russia to Europe, the imminent two-week regular maintenance on the Nord Stream pipeline beginning on July 11, and fears that Russia may not restore supply once the maintenance is over, are also critical factors in the fears of a recession in the German and the Eurozone economies, and all economies in the E.U., in the very near future.

The forever-changed energy markets since the Russian invasion of Ukraine have highlighted the fact that gas has become a truly global commodity in recent years, with strong LNG demand in Europe driving up prices in the region and in Asia. The ability of American exports to at least partially compensate for lost Russian supply has also pushed the price of the U.S. natural gas benchmark at Henry Hub to double over the past year. U.S. gas prices have slumped by some 40% since the Freeport LNG outage as more gas will be available for U.S. consumption.

“The world is now thinking about gas as it once thought about oil, and the essential role that gas plays in modern economies and the need for secure and diverse supply have become very visible,” Book added.

The need for diversification and the importance of gas as a global rather than regional commodity has never been greater as Europe aims to free itself from the Russian gas grip and never be dependent on Moscow for its energy supply again. The E.U. is far from reaching that goal now, as the Russian cuts to gas supply showed—Germany, Europe’s biggest economy, warned of a “Lehman Brothers” moment if gas stops now.

Not that Europe is not trying—projects for LNG import terminals have been activated from Greece to Germany and Finland, but it will take a while for Europe to break free from Russian gas dependence. The E.U.’s target is for this to happen by 2027.

LNG Investment Is Back

The leaders of the G7 group of the world’s leading industrial nations also stressed the importance of LNG during their summit in Germany at the end of June. While reiterating support for the Paris Agreement climate targets of limiting global warming, the G7 leaders acknowledged that “investment in this sector is necessary in response to the current crisis.”

“In these exceptional circumstances, publicly supported investment in the gas sector can be appropriate as a temporary response,” they added.

Meanwhile, LNG buyers are returning to long-term contracts in order to secure the long-term supply of non-Russian gas and to insulate themselves from spiking volatile spot prices.

“Many traditional LNG buyers will neither procure spot gas or LNG nor renew or sign additional LNG contracts with Russian sellers. Spot prices have also been high and volatile, pushing many buyers towards long-term contracts,” Wood Mackenzie principal analyst Daniel Toleman said in May.

According to Massimo Di-Odoardo, Vice President of Gas and LNG Research at Wood Mackenzie: “A huge increase in LNG project investment is being supported by a rapid increase in European LNG demand, with U.S. developers already looking to fill the space.”

Qatar is also significantly expanding its LNG export capacity in the world’s largest LNG project ever, which was announced a year before the Russian invasion of Ukraine. In recent weeks, state firm QatarEnergy has picked international majors ExxonMobil, ConocoPhillips, Eni, TotalEnergies, and Shell as partners in the North Field East expansion project.

Until new U.S. and Qatari capacity comes online in the middle of this decade, the gas market will be tight as energy trade flows are changing forever. The recent rally in Europe’s gas prices since Russia slashed supply may not be over, as the E.U. scrambles for alternative supply to avoid a winter of rationing and recession.