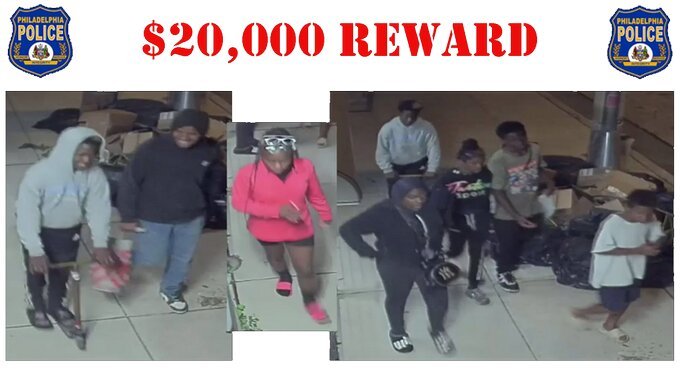 Philadelphia Police on Friday issued a call for the public’s help in identifying a gang of Black children seen on video beating an elderly Black man to death two weeks ago. The attack took place around 2:45 a.m. June 24 as James Lambert Jr., 73, was seen on video walking by himself while being chased and attacked by a gang of four Black boys and three Black girls. One of the boys bashed Lambert in the head with the base of a large traffic cone, knocking him down. After apparently making sure the attack was being recorded on a smartphone, a girl picked up the cone and threw it down on Lambert as he lay on the sidewalk. Lambert was able to get up and stumble a brief distance with the children in pursuit. The girl again picked up the traffic cone and held it high over her heard as she chased Lambert out of camera range, reappearing moments later without the traffic cone.

Police say Lambert died the next day from injuries sustained in the beating.

WATCH: 7 teens beat & killed a 72 year old man on Cecil B. Moore Ave two weeks ago this morning. 3 girls & 4 boys, used a traffic cone as a weapon. The man fell, hit his head & @phillypolice say he died the day after the 2:38 am attack on June 24th 1/2 ⁦@FOX29philly⁩ pic.twitter.com/4vmfGqOpp5

Wanted: Suspects for Homicide in the 22nd District [VIDEO]

On Friday June 24, 2022, at approximately 2:38 am, in the 2100 block of Cecil B. Moore Avenue, a 72-year-old male victim was attacked by four Black male and three Black female teen offenders. The teens struck the victim several times with objects, knocking the victim to the ground causing injuries to his head. The victim was transported to the hospital where he died of his injuries the following day.

THE CITY OF PHILADELPHIA IS OFFERING A REWARD OF $20,000 LEADING TO AN ARREST AND CONVICTION FOR EVERY HOMICIDE.

Suspect Description: Four black males and three black females who appear to be in their early to mid-teens.

Photo of Lambert from his funeral card via WCAU-TV reporter Danny Freeman: “This is James “Simmie” Lambert, the man who was killed. His family tells me they’re heart broken and they saw him just hours before he was attacked. They’re in disbelief a group of kids did this.”

This is James “Simmie” Lambert, the man who was killed.

His family tells me they’re heart broken and they saw him just hours before he was attacked.