MUST SEE: Air Force Expels Master Sergeant for Refusing Experimental COVID Vaccine – “After 19 Years, They’re Gonna Throw Everything Away that I’ve Worked For” 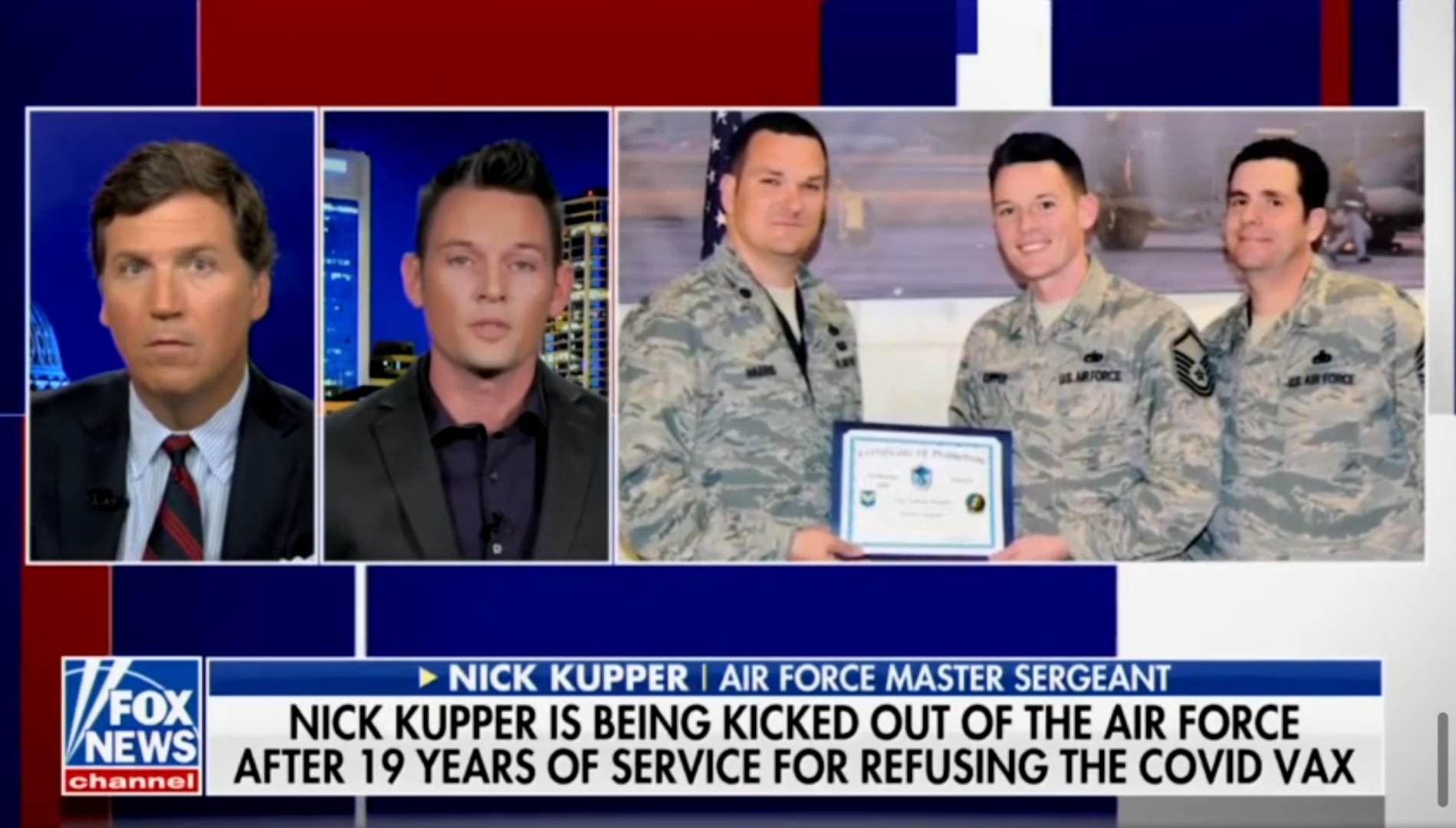 As our nation faces economic collapse and our greatest enemies literally engage in war games in our backyard, US Military and Defense leaders are focusing on the important things – mainly, creating “safe spaces“, pushing radical leftist ideologies, and – of course – purging the ranks of all dissenters.

This week, with tens of thousands of world-class men and women across all five military branches facing dishonorable discharge for refusing to take the experimental vaccine, the United States Air Force began issuing its first cuts, including a highly-decorated, 19-year veteran Master Sergeant named Nick Kupper.

In an appearance with Tucker Carlson on Wednesday, Kupper blasted Biden’s “illegal” mandates and warned that tens of thousands of other military members are facing the same fate for refusing the vaccine – Unbelievably, as much as 10% of the entire US military could get the ax, according to Kupper.

“This is not a problem for tomorrow to be solved or the next day. This is a problem right now. You’re talking about over 10% of your military is looking to be canned right now.”

After refusing to adhere to Biden’s deadline to get vaccinated, Nick Kupper was informed that he would be expelled from service on Tuesday.

Just like the overwhelming majority of cases, Kupper’s application for religious exemption was declined. Just a handful have been approved across the entire military.

He was just one year away from securing his 20-year retirement from the Air Force.

“[It’s] all because they won’t grant me a religious exemption waiver. They’re about to kick me out. Actually, [it’s] as of tomorrow. They just called me before the show and said they want to get [me] my separation package…

…after 19 years, they’re gonna throw everything away that I’ve worked for, but I’m just one of hundreds of thousands of people who are being kicked out because we won’t take an illegal emergency use vaccine…”

At the same time that the military is purging its members with the vaccine mandates, the armed forces are facing unprecedented recruiting issues across the board. The Army, for example, has only reached 40% of its recruiting goals for the fiscal year – and there are only 3 months left to go. They, along with all other branches are projected to fall short of recruitment projections for 2022.

The Air Force, as Kupper pointed out, will fail to meet its recruiting for the first time since 1980.

“I mean, if I were China or Russia I’d be chomping at the bit right now,” Kupper said grimly.

What happens to the greatest military the world has ever seen when these great soldiers who love our country are all gone because they refuse to take the experimental vaccine?

The post MUST SEE: Air Force Expels Master Sergeant for Refusing Experimental COVID Vaccine – “After 19 Years, They’re Gonna Throw Everything Away that I’ve Worked For” appeared first on The Gateway Pundit.