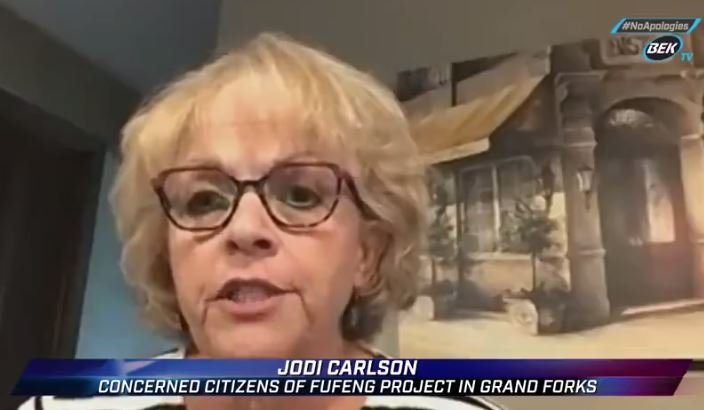 The Chinese firm Fufeng Group recently purchased 300 acres of farmland in North Dakota just down the road from a US Air Force base that houses sensitive drone technology near Grand Forks.

The farmland is just a 20-minute drive to the Grand Forks Air Force Base.

The Fufeng Group also purchased a corn mill near Grand Forks. Local citizens are rightly concerned with this new project in their backyard.

The local Grand Forks City Council members are very upset with leading opponents to the Fufeng corn mill project. They have even lashed out at skeptics online.

The Grand Forks Herald reported in May.

Since January, Kennedy has closely followed Fufeng Group, posting a follow-up blog in March. He argued that the project still hadn’t been vetted properly and that benefits to local farmers are overstated. He hammered local leaders for downplaying the plant’s links to China. He’s made a slew of media appearances since then, from local outlets to a hit on Blaze TV.

But as Kennedy has spoken out against the project, top Grand Forks leaders have grown frustrated with what they see as wild speculation that fueled opposition in the community. Some have publicly wondered about Kennedy’s motives, even skirmishing with him on social media.

“Who’s paying his bills, who paid him to fly to Grand Forks (from Ohio) … who’s paying him to put out the garbage, conjecture, speculation, innuendo that he is?” City Council President Dana Sande said in an interview this week.

Then this week the FBI and local police visited a top opponent to the corn mill project. Here is what Jodi Carlson posted on Facebook that warranted a visit by the Stasi FBI.

“We have petitioned for Redress in the most humble terms: our repeated Petitions have been answered only by repeated injury. When a long train of abuses and usurpations, pursing invariably the same Object evinces a design to reduce them under absolute Depotism (oppressive absolute power), it is our right, OUR DUTY, to throw off such Government, and to provide new Guards for our future Security.” (The word “their” (the people) replaced with “our”).”

It was a paragraph from the Declaration of Independence!

The local police and FBI visited Jodi Carlson’s home for posting a paragraph from the Declaration of Independence!

Grand Forks police and the FBI on Thursday visited the home of Jodi Carlson, a leading opponent of a new corn mill to be owned by the China-based Fufeng Group, following up on a social media post quoting the Declaration of Independence that mentioned the overthrow of the government.

The authorities ultimately found no cause for concern, a police report states.

The incident has provoked an angry response from opponents of the corn mill project, many of whom are part of the “Concerned Citizens of Fufeng Project in Grand Forks” group where the activity took place.

“This is a group that is fighting against government overreach, and promoting the voices of the people who live in the community,” Carlson later wrote in a post to the group. “We are not here to be censored, nor harassed by the local police department.”

But law enforcement concern about Carlson’s Facebook activity is also an indication of how intense the debate about Fufeng Group has become in Grand Forks. The agribusiness’ interest in a North Dakota facility was announced in November, and its arrival has been marked by extreme skepticism over Fufeng’s roots in China — which has sparked strong resistance from critics of the project.

** Jodi Carlson spoke about the FBI visit on BEK TV at the 22 minute mark.

The post Local Police and FBI Visit Home of Top Opponent to New China-Owned North Dakota Corn Mill — After She Posts Paragraph from Declaration of Independence on Social Media appeared first on The Gateway Pundit.