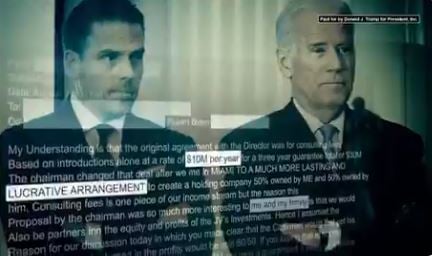 Hunter Biden wouldn’t have a dime if his dad wasn’t a corrupt politician.

TGP has reported extensively on Hunter Biden’s corrupt dealings in China and today there is more.

President Joe Biden’s administration sold 950,000 barrels of oil from the U.S. Strategic Petroleum Reserve to a Chinese state-owned gas company that has financial ties to a private equity firm cofounded by Hunter Biden, according to a Washington Free Beacon report.

In April, Biden’s Department of Energy announced the nearly one million barrel sale to Unipec, which is the trading arm of Sinopec. Sinopec is wholly owned and operated by the Chinese Communist Party.

Unipec reportedly purchases oil across the globe and then apparently sells it through its Sinopec Marketing subsidiary.

If you travel through China you will find Sinopec gas stations all over the place.  It’s one of the largest oil and gas companies in China.  Joe Biden took oil from US reserves which are supposed to be held for emergencies and national crises.  This reserve is not to be used to give to our enemies who are attacking us economically and recently with COVID19.

TGP reported that Hunter had numerous business dealings in China while his dad was Obama’s Vice President with other Chinese companies.

We also know that Hunter was close to the ‘spy chief’ in China.

Hunter’s business deals in the past were not alone.  Hunter also held money for his dad, then Obama Vice President Joe Biden.

The Biden deals with China stink to high heaven.  This most recent sale of oil to China looks very shady.  Joe Biden should be impeached for numerous reasons.  Every day there are more reasons to do so.

The post Joe Biden Sold a Million Barrels of Oil from US Reserves to China Company Connected to Hunter Biden appeared first on The Gateway Pundit.