The number of Americans in financial distress continues to soar, as the latest Labor Department report shows the consumer-price index at a 40-year high of 8.6% annually. The Monmouth University Polling Institute commissioned a new study that found a majority of Americans believe the nation is on the “wrong track” because of President Biden’s economic policies.

Monmouth conducted the survey in late June and asked eleven questions to 978 adults age 18 and older. One question that piqued our interest was Question Six. It asked: “Would you say things in the country are going in the right direction, or have they gotten off on the wrong track?”

“Economic concerns tend to rise to the top of the list of family concerns, as you might expect, but the singular impact of inflation is really hitting home right now,” Patrick Murray, director of the Monmouth University Polling Institute, wrote in the study.

Murray added: “And most Americans are blaming Washington for their current pain.”

When respondents were questioned about their “current financial situation,” 42% said they were “struggling.”

The study results mirror the weak performance of Biden’s job approval data, at a record low of around 38%.

Even with 22 straight days of gasoline declines at the pump, the president’s approval rating has yet to turn higher meaningfully — and suggests failed “Bidenomics” has scarred many working-class folks. 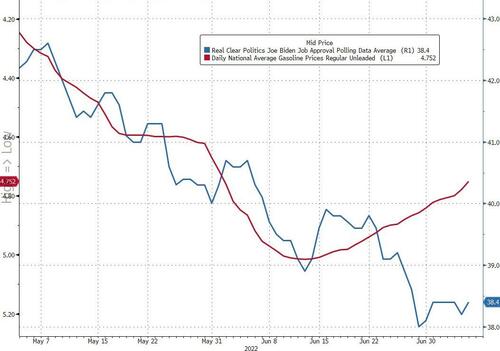 The state of the consumer is concerning. Many have maxed out their credit cards and drained savings to survive the inflation storm. Millions are on the verge of eviction as they can no longer pay rent. Inflation has crippled many households, and the cure to inflation is a recession, which may inflict even more pain with increasing job loss.

High inflation is becoming hard to ignore, and the administration continues to scapegoat Russia for the highest inflation rate in 40 years.

“We’ve got a long way to go because of inflation, because of – I call it the Putin tax increase – Putin because of gasoline and all that grain he’s keeping from being able to get to the market,” Biden said on Wednesday in a speech to a union group in Ohio.

Monmouth’s newest survey is a wake-up call for the Biden folks who assured everyone inflation “transitory” had been one of the worst calls in decades. The result is crushing the middle class (or whatever is left). People will take their anger out on “Bidenomics” at the polls and vote with their empty wallets come midterm elections.