WATCH: Kari Lake Responds To Biden Regime Lawsuit On Bannon’s War Room: “Obviously, He Wants To See ILLEGALS Vote. We Do Not And They Will Not In Arizona When I’m Governor” 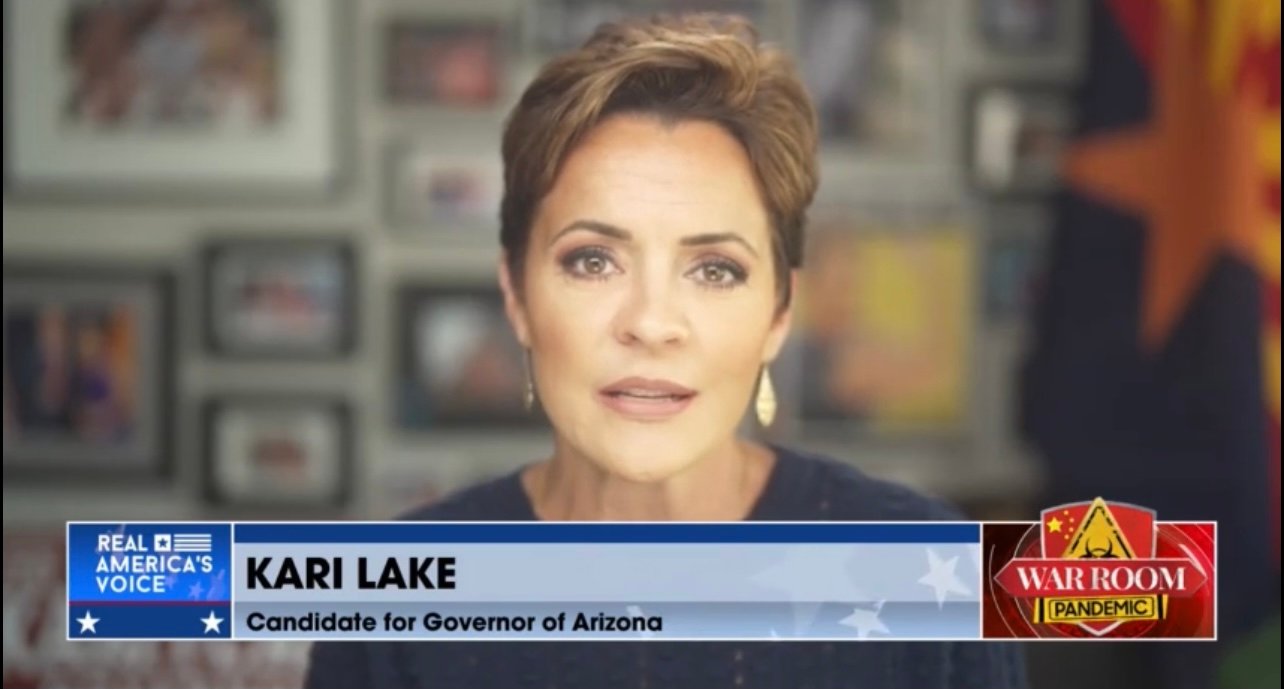 The Gateway Pundit reported yesterday morning that the Department of Justice is suing Arizona to ban safeguards that prevent illegal immigrants from voting in federal elections. The Democrats will stop at nothing to allow cheating in our elections.

This is similar to the DOJ’s intimidation and targeting of state lawmakers and citizens who tried to investigate the Fraudulent 2020 Election.

The Gateway Pundit previously reported that Trump-Endorsed Arizona State Senator Wendy Rogers warned these goons to stay in their lane after they made threats against State-led election audits. After these investigations found evidence of hundreds of thousands of fraudulent votes in Arizona, multiple Arizona lawmakers were subpoenaed by the FBI and Liz Cheney’s sham January 6th Committee despite having nothing to do with January 6th.

Arizona Lawmaker Responds to AG Garland: “You Will Not Touch Arizona Ballots or Machines Unless You Want to Spend Time in Arizona Prison”

Kari Lake is the only candidate who will stand up to the lawless federal government and Attorney General Merrick Garland. The Gateway Pundit reported that Governor Doug Ducey, who certified the Stolen Election and allowed the invasion of Arizona’s southern border, endorsed Lake’s open-borders RINO primary opponent, Karrin Taylor Robson.

On Wednesday, Kari Lake joined the War Room to discuss this bogus lawsuit and her plan to secure our borders and elections.

Lake’s segment opened with an explosive new ad, where Kari vows to follow through on her promises to “issue a declaration of invasion, Finish President Trump’s wall, blow up the cartel’s drug tunnels and surveillance drones, and deploy the Arizona National Guard to stop illegals from entering.” Read Kari’s full Border Plan here.

Bannon: States are stepping up and actually saying, ‘hey, there’s an invasion, and we’re going to stop it if the federal government’s gonna just exacerbate it.’ Why has this not happened in Arizona, ma’am?

Lake: I don’t know. I think it’s a lack of leadership, a lack of will. I hate to think that our current crop of leaders want this to go on and want to see a change in our voting demographics. A lot of people believe that people coming in illegally are being kind of shipped around the country to change the voting demographics, and they’re ready to give away American citizenship. And America is not going to put up with that. My border policy and I worked with some of those men that you mentioned to put this together to make sure we had a very strong border policy that would hold up in the courts and that would actually secure our border. And we will do it starting in January of ’23. I’m happy, Steve, that a couple of very strong sheriffs in Texas are starting to act on their own and in their own counties, calling it what it is: an invasion, and enacting that Article One Section 10 ability to protect their own counties and their own citizens.

Lake: There’s no words for what he’s up to. Why would he want us to allow people who are not legal to vote in our election? What’s the reason for that? It’s the most outrageous administration, illegitimate administration, and they are dead set on destroying America. And that’s why we need to elect strong Governors, America first governors, especially here in Arizona. We don’t have a lot of border states left, and we’ve got to protect the ones we’ve got with strong leadership. We will push back against somebody like Merrick Garland. Obviously, he wants to see illegals vote. We do not, and they will not in Arizona when I’m Governor. And I hope that our state is strong enough this election to make sure that we’re demanding proof of citizenship and ID when we vote this coming election, which is August 2 for the primary. However, they just started early voting. Because in Arizona, we have an election month, not an election day.

Bannon: You see nothing but MAGA, and you see nothing but Patriots. Yet, you have Ducey who won’t do anything. You got an Attorney General that won’t do anything. You’ve got candidates that are taking that party line. How can the establishment — you know, blue blazer khaki pants crowd — seem like it controls the Republican Party, the State when there’s so much support for Donald J. Trump, who happens to endorse you?

Lake: Well, they’re in an all-out panic right now. I mean, the Devil doesn’t die quietly. And the swamp is pushing their own handpicked candidate in my opponent, Karrin Robson. She’s married to a 95-year-old billionaire. She’s spending all of his money trying to buy this election and paint herself as America First when she’s truly an open-borders globalist with an incredibly liberal voting record. When Ducey appointed her to the Board of Regents here in Arizona, she voted pro-abortion. She voted for gun control. She voted to give illegal immigrants a reduced tuition, less than what American students had to pay. She’s bad news for Arizona, and she’s trying to buy this election because they are so panicked about getting an America First Patriot in office. But the good news is she may be trying to buy the election, Steve, but the people of Arizona aren’t buying the lies she’s pushing. And she can pour as much of her husband’s billions down the toilet as she wants, but we will not have this election stolen or bought. It will be won fair and square, and we will have America/first Arizona first policies in place starting January of 2023 in the first minute I take office.

The post WATCH: Kari Lake Responds To Biden Regime Lawsuit On Bannon’s War Room: “Obviously, He Wants To See ILLEGALS Vote. We Do Not And They Will Not In Arizona When I’m Governor” appeared first on The Gateway Pundit.