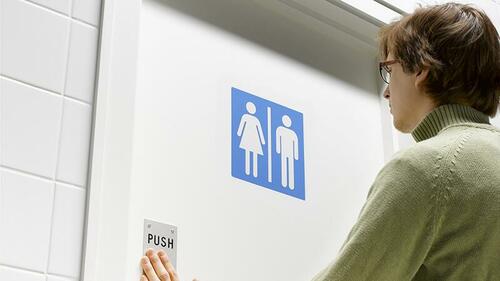 The British government has made it mandatory for all public buildings to have single sex toilets, a separate ladies and a separate gents space, halting the trend of having unisex toilets where both men and women can enter.

The move away from ‘gender-neutral’ toilets in hospitals, schools, offices and entertainment spaces is believed to have been signed off on by ministers, after Conservative Party Equalities Minister Kemi Badenoch made the case for it being a legal necessity.

The move will mean that all planning and building regulations will be required to include a self-contained space for women-only facilities, as well as the introduction of partitions in unisex bathrooms already in buildings.

A government source told The London Telegraph that “It is vital that women feel safe and comfortable when using public facilities and that there is a greater emphasis on provision that is focused on dignity, privacy, tolerance and respect for all.”

“These changes will stop the march of ‘universal’ and forced sharing of spaces – with a focus on guaranteeing privacy for all,” the source added.

Women’s rights group Fair Play For Women had lobbied the government to make the changes, noting that “Sex-specific toilets are universally recognized as making a positive contribution to the lives of women and girls,” adding that “They are important factor which contributes to female emancipation.”

The group also noted that single sex spaces are key for the “basic safety of women, reducing their risk of assault, rape and murder.”

The group also urges that “Trans-inclusion policies are dictating that trans-identifying children and young people should have access to the facilities and sports of their self-declared gender rather than their sex. This has the effect of making such facilities and activities mixed sex. This is much more to the detriment of girls than boys.”

“The UK Department of Education mandates sex-segregated toilets and changing rooms from the age of eight in schools. Trans inclusion policies are being promoted and adopted, with the best intentions, which undermine this requirement,” the group further warns, adding that “Elsewhere in the UK, the adoption of mixed changing rooms has led to increased risk for women of sexual assault.”

Of course, the move to cement single sex toilets in law was instantly declared ‘transphobic’ by the pronoun mob:

EVERYONE LITERALLY HAS GENDER NEUTRAL TOILETS IN THEIR HOMES AND ON LIKE ALL TRANSPORT SERVICES. This transphobic moral panic is getting on my non existent tits FFS. https://t.co/SPf8HihNh2

I know who lives in my house and who uses my toilet.
I don’t have bloke’s wandering in off the street to use it.

Isn’t that because only one person goes in that toilet at a time? Like a plane? Hardly a fair comparison.

In case you somehow didn’t realise it’s just transphobic bullshit, they decided to cite “women are worried about longer queues” as a reason against gender neutral toilets. Do they not have any idea how long the queues are for women only loos? Come up with a better lie next time https://t.co/S1MJuBaDWw pic.twitter.com/CqkhGhEe1l

Single-sex toilets to be mandatory in all new public buildings in the UK, thanks to transphobic Equalities Minister Kemi Badenoch.https://t.co/ZUy2cpYXRx

I am not transphobic at all. I do not want to open the cubicle to a woman’s toilet and see a man in front of me – common sense sense, no? Gender neutral loos are the answer but not as replacement to women spaces – it cannot be an either or scenario. https://t.co/WNyOA1iuNt

Clear display of transphobic reporting by @Independent. Note how they word it as “4 in 10” don’t want gender neutral toilets. This means 6 in 10 (majority) either support or are indifferent to it. Got to keep with the current hysterical narrative I suppose. pic.twitter.com/hKowOZhMsV

So are we getting separate male disabled and female disabled toilets then? Or is your argument actually based on transphobic nonsense? https://t.co/FGslk3InSW

Nobody wants this. The most transphobic company in the UK wouldn’t give enough of a fuck to spend a single extra penny. But HM Government got wind that it would be harder to find an excuse to kill trans people in unisex toilets, so here we are.

And of course, the favourite ‘you’re a fascist’ insult came out again: