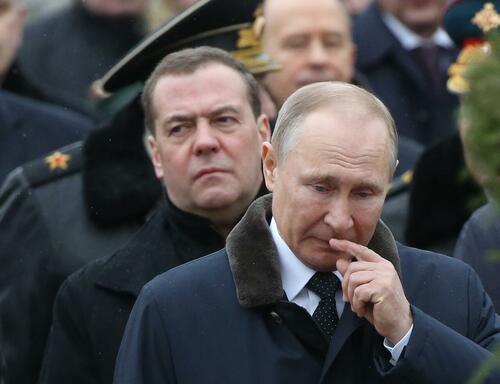 Former Russian President Dmitry Medvedev on Wednesday warned the US against trying to punish Russia for its war in Ukraine, saying that doing so would risk humanity since Moscow has the world’s largest nuclear arsenal.

“The idea of punishing a country that has one of the largest nuclear potentials is absurd. And potentially poses a threat to the existence of humanity,” Medvedev wrote on Telegram.

Medvedev, who currently serves as the deputy of Russia’s Security Council, had warned earlier in the war that if the US destabilizes Russia like it did Iraq and other countries, it could lead to a nuclear “dystopia.” As of 2020, Russia was estimated to have 6,375 nuclear warheads, and the US said it possessed 5,750 warheads.

Even though it’s widely believed that a direct conflict between the US and Russia could quickly turn nuclear, it doesn’t appear to be a factor in the Biden administration’s response to the war in Ukraine. Instead, the US is pouring billions of dollars in weapons into the country and continues to escalate its involvement in the war.

In his Telegram post, Medvedev also called out the US for hypocrisy for trying to put Russia on trial for war crimes, citing the millions killed by the US since World War II in countries like Korea, Vietnam, Iraq, Afghanistan, and many others.

“So who’s going to give us a show trial? Those who kill people and commit war crimes with impunity, but do not meet real condemnation in the international structures financed by them?” Medvedev said, according to a Google translation of his Telegram post.