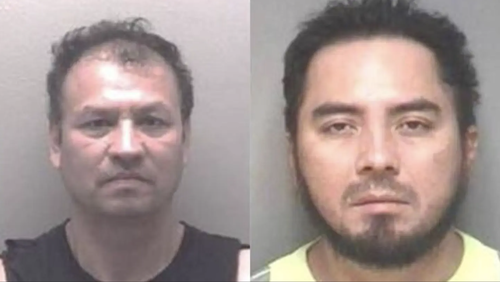 Police claim a tip from a concerned citizen foiled a planned mass shooting at an evening July 4th celebration at a packed Richmond amphitheater.

Now, 52-year-old Julio Alvardo-Dubon and 38-year-old Rolman A. Balacarcel sit in the Richmond city jail, each initially charged with being a non-U.S. citizen in possession of a firearm. Both are Guatemalans in the United States illegally, and it’s been claimed at least one has already been deported multiple times.

Apparently reflecting the fact that he was only charged with illegal possession, Alvardo-Dubon’s bond was set at just $15,000, and it isn’t clear if he’s already been released, according to the Associated Press. There’s no report yet of Balacarcel’s bond.

At a Wednesday afternoon press conference, Richmond police chief Gerald Smith credited a “hero” citizen who called police after overhearing a conversation about a planned mass murder at the city’s July 4th celebration at Dogwood Dell, a 2,400-seat amphitheater in the city’s Byrd Park.

“There’s no telling how many lives this citizen saved with one phone call,” Smith said. The tip came in on July 1. That same day, police proceeded to a residence on the 1000 block of Columbia Avenue.

Smith said Alvarado-Dubon consented to police entering without a warrant. “Once inside that residence, they saw evidence in plain view that corroborated the witness’s statement,” said Smith, who later specified that the evidence was “firearms in plain view.”

Under advice from the Department of Homeland Security, police arrested Alvarado-Dubon for being an alien in possession of a firearm, and seized two assault rifles, one handgun and 223 rounds of ammunition.

Richmond police then put surveillance on Balacarcel, whom Smith described as Alvardo-Dubon’s roommate. On July 5, police concluded they had probable cause to arrest Balacarcel on the same charge, and did so near Charlottesville, Virginia.

“Their intent was to conduct a mass shooting at our Fourth of July celebration,” said Smith, who gave no indication that police found specific evidence of the plot, or that either of the two confessed to it.

A motive has not yet been identified, nor have police determined how the duo acquired the weapons. Smith said neither had a record of previous engagements with Richmond police.

A reporter at the press conference said his sources indicate at least one of the two has been deported multiple times, asked Smith how he felt about it. “It can be frustrating when things like that occur, that people who shouldn’t actually be here are criminals [and] actually continue to be able to do those types of things.”