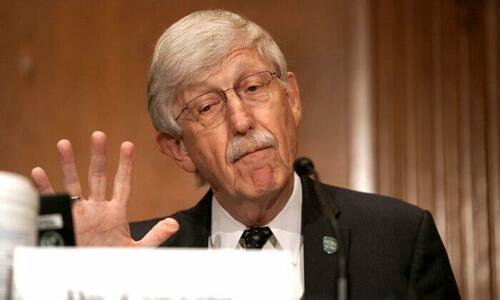 Authored by Mark Tapscott via The Epoch Times (emphasis ours),

When Francis Collins departed as Director of the National Institutes for Health (NIH) in December 2021, his legacy included multiple-millions of dollars in secret royalty payments to himself, prominent colleagues like Dr. Anthony Fauci, and hundreds of other scientists, officials, and researchers working under him.

Today, Collins is the highest paid adviser to the president with the most expensive White House staff ever, according to data compiled by the Chicago-based non-profit government watchdog, Open The Books (OTB).

Collins is paid $300,000 annually as the Acting Science Adviser to President Joe Biden. The new salary represents a 47 percent increase over the $203,500 annual compensation Collins made as NIH Director for 12 years. All salary figures were obtained by OTB under the Freedom of Information Act (FOIA) from the U.S. Office of Personnel Management (OPM).

Earlier this year, The Epoch Times first reported that OTB uncovered more than 1,600 NIH officials, scientists, and researchers who received an estimated $350 million in secret royalty payments from sources outside the government that the agency refuses to identify.

The payments were made between 2010 and 2020, including all but a couple of years of Collins’ tenure.

Collins’ successor as NIH Director, Dr. Lawrence Tabak, admitted to Congress in May that the secret royalty payments have “the appearance of a conflict of interest,” but he claimed the agency has sufficient internal safeguards to prevent abuse.

Federal personnel law and regulations bar government employees from having either actual conflicts of interest or the appearance of conflicts in their decision-making as public servants.

As was his departure from NIH, Collins’ move to the White House was accompanied by controversy. Normally, the president’s Chief Science Adviser is also Director of the White House Office of Science and Technology Policy (OSTP).

But when Biden announced Collins’ appointment in February, the chief executive also announced that he was promoting then-OSTP Deputy Director Alondra Nelson to head the office, thus effectively installing two individuals in what had previously been a single position.

Both positions—Science Adviser to the President and OSTP Director—were previously filled by Eric Lander, who resigned after it was reported he bullied staff members under his supervision.

Technically, Collins is a detailee to the White House, as are the second- and third-highest paid White House advisers. Those include Luisa Paiewonsky, Senior Policy Adviser for Transportation at $191,300, and Stephanie Sykes, Director of Intergovernmental Affairs for Infrastructure Implementation at $183,100. Detailee salaries are included in the White House report to Congress on its employment costs.

The data on the White House salaries was also made public by OTB in a report on July 1.

There are 23 regular White House employees with the title of Assistant to the President, all paid $180,000 annually, including White House Chief of Staff Ron Klain. The average White House salary is $98,649, with both detailees and regular employees included in the calculation.

In his first year in the Oval Office in 2021, Biden’s White House staff included 560 individuals at a cost of $49.6 million, the highest ever reported since 1995 when such data was first reported.

Biden’s White House staff total is almost certain to be lower at the end of 2022 than it was in 2021, because of the exodus of more than 80 individuals in recent months. Even so, OTB projects that the Biden White House staff costs will continue to be the highest ever.