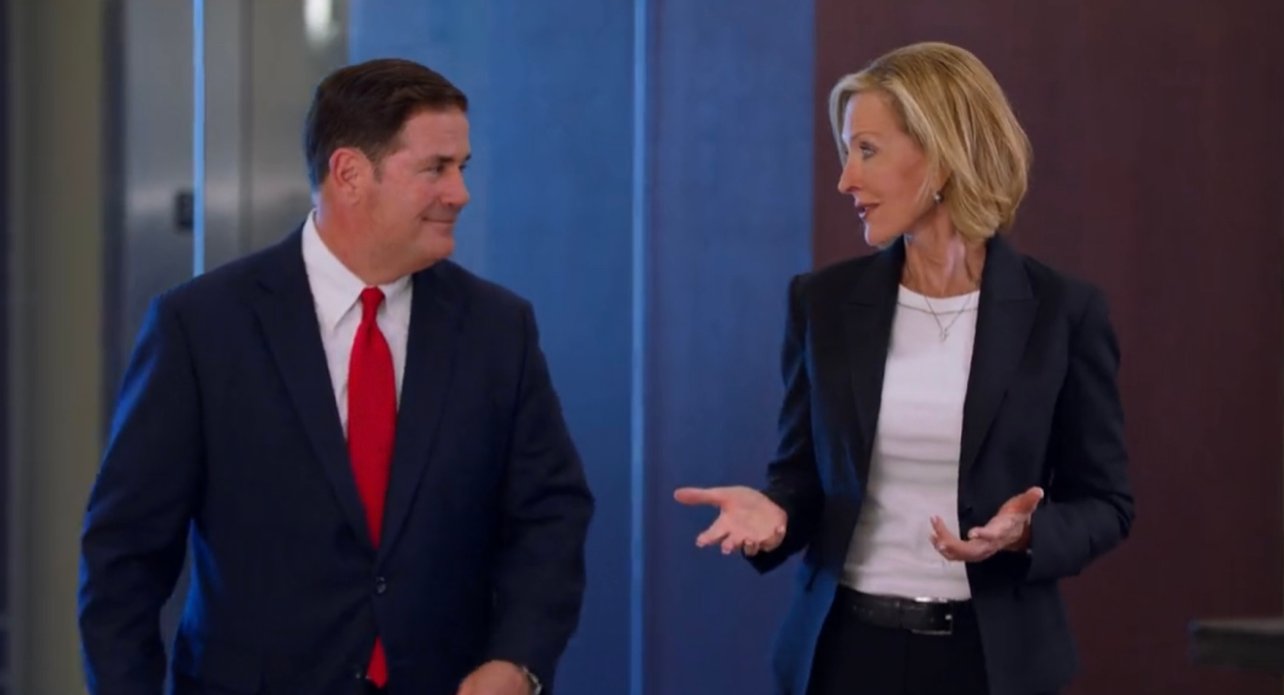 Ducey appointed Robson to the Arizona Board of Regents, the State’s governing board for public universities, in 2017. She voted for liberal Democrat policies, including discounted college tuition rates for illegal immigrants and eliminating second amendment rights on campus. Robson also donated to elect liberal Democrat Rep. Ruben Gallego.

This is clearly another attempt by Ducey to undermine President Trump’s America First agenda in an ongoing feud with the President.

Doug Ducey certified the Fraudulent 2020 Election after it was stolen from President Trump. The Gateway Pundit has reported extensively on the massive evidence of voter fraud presented after the Arizona audit and the “2000 Mules” investigations. Both discovered hundreds of thousands of illegal or fraudulent ballots were inserted into the 2020 Election.

President Trump has released multiple statements bashing Doug Ducey for certifying the Stolen Election and being one of the worst Governors in America.

Like Ducey, Karrin Taylor Robson also refuses to acknowledge the Stolen Election or admit that Joe Biden is an illegitimate President. Lake has made this issue, which is destroying our Country, the center point of her campaign.

Robson will give Arizona another four years of the RINO Doug Ducey/McCain Establishment.

As The Gateway Pundit recently reported, Arizona’s leftist media outlets even admit that Kari Lake will give us another four years of President Trump.

Trump-Endorsed Kari Lake will fight for election integrity and secure Arizona’s southern border, unlike Doug Ducey who certified a rigged election and shipped illegal immigrants across the US instead of sending them back home.

The Gateway Pundit reported that in a new campaign ad, Lake vows to “issue a declaration of invasion, Finish President Trump’s wall, blow up the cartel’s drug tunnels and surveillance drones, and deploy the Arizona National Guard to stop illegals from entering.” Lake will do everything possible to protect Arizona from the invasion. Kari’s full border policy release can be seen here.

Tucson radio host Garret Lewis dubbed this endorsement “the kiss of death for Karrin’s campaign!” Doug Ducey is so out of touch and hated by Arizona Republicans.

The kiss of death for Karrrrrin’s campaign! @Karrin4Arizona is so desperate, she wanted @DougDuceys endorsement. Doug is so disliked, he couldn’t run for Senate. Only the establishment likes Doug. Funny how Doug says Karrin will secure the border. Why didn’t you do that, Doug? https://t.co/NLDyX2hfxr

Candidate for AZ State House Christian Lamar pointed out how Arizonans suffered under Doug Ducey’s unconstitutional COVID lockdowns, the Stolen Election, and a wide-open Southern Border. We will see more of the same from Karrin Taylor Robson.

In his video endorsement, Ducey praised Robson’s “record of conservative results,” falsely claiming she is pro-gun and will “stand up to Joe Biden and the radical left.” This is funny considering Robson’s anti-gun liberal voting record and past donations to liberal Democrats.

Doug Ducey endorses Karrin Robson.
Ducey (a so-called conservative) destroyed AZ businesses/workers
with his unconstitutional shutdown, our border is still wide open & he certified Biden’s 2020 AZ electors.
If u vote Robson thats exactly what u get above. https://t.co/B97TarfoNS https://t.co/ZEVRTEFIsQ