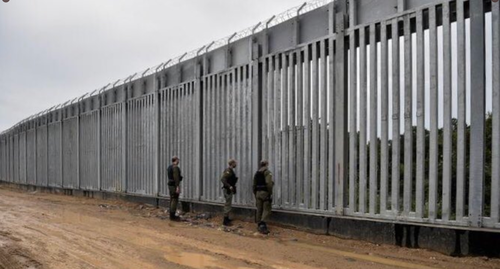 On Wednesday the Belarusian military issued a stern warning and statement threatening that it’s ready to strike Polish military infrastructures if “provocations” are launched from Poland, however no specifics were given on the type of aggression Belarus is alleging could happen.

Poland is likening the border wall as part of the country’s “fight against Russia”. Last Thursday Polish Prime Minister Mateusz Morawiecki while speaking of the wall said, “The first sign of the war in Ukraine was [Belarus President] Alexander Lukashenko’s attack on the Polish border.”

And now, late in the day Wednesday, the Polish prime minister is alleging that Russian agencies have conducted a major hack of Polish government devices, per news wires. The accusation comes a week after several Lithuanian public and private websites went down in what was described as a cyberattack carried out by a Russian-backed hacker group.

Meanwhile, Ukraine has said that Russia is attempting to draw its large ally Belarus into the Ukraine conflict. So far, Belarus’ logistics and staging support to Russian troops has been well-known, but Minsk has refrained from sending in active military forces.

Additionally, late last month Russian President Vladimir Putin confirmed that Russia will supply Belarus with Iskander-M mobile guided missile systems. Though conventional weapons, they they are capable of carrying nuclear warheads – thus the action earned the condemnation of the Pentagon after Putin said, “we will transfer to Belarus Iskander-M tactical missile systems, which can use ballistic or cruise missiles, in their conventional and nuclear versions.”

Iskander missiles are known to have a range of up to 500km and will be handed over to Belarus “within months,” according to Putin’s prior statement.

At the time of that announcement, Lukashenko informed Putin that Belarus remains alarmed “aggressive” and “confrontational” policies of its NATO neighbors Lithuania and Poland.

This has fueled concern that should the Ukraine war spill across borders, the fault line would be precisely along Russia’s ally Belarus and its Baltic and East European neighbors to the West. Belarus has already come under US and EU sanctions for its open support given to Putin’s war efforts against Ukraine, allowing Russia to launch the Feb.24 invasion from its territory.