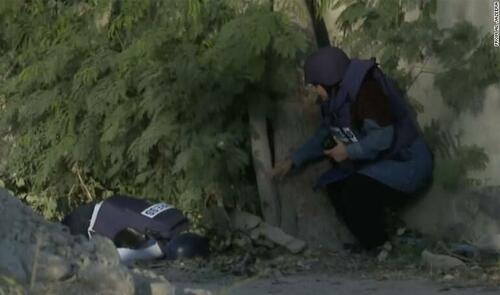 In an announcement timed to receive minimal coverage, the State Department on July 4th said that a U.S. review of the shooting of Palestinian-American journalist Shireen Abu Akleh concluded the fatal bullet likely came from the Israel Defense Forces (IDF). However, in what critics are calling a baseless whitewashing of the incident that ignores key facts of the case, the U.S. government said there’s “no reason to believe” it was intentional.

The U.S. announcement came 10 days before President Biden is slated to visit Israel on July 14 and 15. The trip will also take him to Saudi Arabia. With the kingdom having slaughtered Washington Post writer Jamal Khashoggi, both hosts will have the shadow of a slain journalist hanging over them.

Abu Akleh, a star reporter for al Jazeera, was shot in the head on May 11 in the West Bank town of Jenin, as she and her crew reported on an Israeli raid on a refugee camp. In the immediate aftermath, the Israeli government rushed to blame “Palestinian terrorists firing indiscriminately,” while witnesses said an IDF unit was the clear culprit.

In a three-paragraph statement, State Department spokeman Ned Price said, “After an extremely detailed forensic analysis, independent third-party examiners, as part of a process overseen by the U.S. Security Coordinator (USSC), could not reach a definitive conclusion regarding the origin of the bullet” as “ballistic experts determined the bullet was badly damaged, which prevented a clear conclusion.”

However, Price said that, after reviewing both the IDF and Palestinian Authority investigations,

“The USSC concluded that gunfire from IDF positions was likely responsible for the death of Shireen Abu Akleh. The USSC found no reason to believe that this was intentional but rather the result of tragic circumstances during an IDF-led military operation against factions of Palestinian Islamic Jihad on May 11, 2022, in Jenin, which followed a series of terrorist attacks in Israel.”

It would be one thing for the State Department to say it could not determine whether the killing was intentional; it’s another altogether to declare there’s “no reason” whatsoever to think so.

Indeed, a weapons expert consulted by CNN noted the tight shot group on the tree where Akleh stood is consistent with carefully aimed fire—and Abu Akleh and her crew were wearing blue helmets and matching vests marked “PRESS.”

CNN’s investigation by 10 journalists, which drew on 11 videos, eight eyewitness accounts and consultations with weapons and forensic audio experts, concluded Abu Akleh was “shot dead in a targeted attack by Israeli forces.” (The video version of the report is embedded below.)

We should emphasize that CNN isn’t known for routinely casting a critical eye on the Israeli government. Here, as with Khashoggi, mainstream U.S. media outlets seemed more motivated to uncover unflattering facts about a supposed “ally” in a situation where the victim was one of their own.

While the State Department vaguely attributed the death to “tragic circumstances” during an IDF operation against Palestinian militants, independent investigations found no indication that militants were anywhere near the IDF rifleman’s direction of fire. Video shows a relaxed scene moments before gunfire erupted. Jenin residents smile, make small talk and smoke cigarettes as they watch the al Jazeera crew led by the star reporter Abu Akleh.

According to Reporters Without Borders, Israel has killed at least 30 journalists since 2000, including two Palestinians shot by IDF snipers while reporting on protests near the Gaza-Israel border in 2018.

In the wake of the killing of the Palestinian-American citizen Abu Akleh, members of Congress urged Biden to launch an FBI investigation of the murder—but to no avail.

The Palestinian Authority said it “rejects the [U.S.] dismissal of the Israeli occupying forces’ intentional targeting of Palestinian journalists…as mere ‘tragic circumstances’ and not an intentional war crime…this whitewashing will only further institutionalize Israel’s entrenched impunity.”

In its own statement, the IDF said its investigation “conclusively determined that no IDF soldier deliberately fired at Ms. Abu Akleh” but that it will continue to investigate the incident.

Abu Akleh’s family released a statement saying they were “incredulous” and that:

“The conclusory [U.S.] pronouncement that the killing was not intentional…is frankly insulting to Shireen’s memory and ignores the history and context of the brutal and violent nature of what is now the longest military occupation in modern history.”

For Americans who treasure George Washington’s counsel against “passionate attachments” to foreign governments and Thomas Jefferson’s admonition against “entangling alliances,” the timing of the announcement is an additional affront—the American government chose “Independence Day” for the latest demonstration of its slavish devotion to a faraway state that’s a moral, financial and strategic liability.