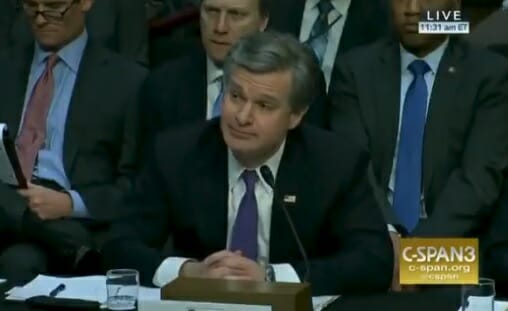 We are all used to Chris Wray running coups against Trump and arresting his supporters in pre-dawn raids.

Under Chris Wray’s leadership the Stasi FBI tracked down, stalked and arrested a 69-year-old grandmother and Los Angeles County employee on in June 2021 for walking into the US Capitol 5 months earlier.

Lois Lynn McNicoll was charged with “knowingly entering or remaining in any restricted building or grounds without lawful authority and violent entry and disorderly conduct on Capitol grounds.”

Lois McNicoll was neither “disorderly” nor “violent” during her walk around the US Capitol on January 6th with hundreds of other American patriots.

And as far as having the “lawful authority” to enter the US Capitol — The FBI slipped up and posted a photo of Lois walking through the door with a US Capitol police officer holding the door for her. Dirtbag Chris Wray and his goons also arrested retired Green Beret Jeremy Brown after he would not work as an undercover operative for them at the January 6 protests in Washington DC.

As we reported last year, Jeremy Brown refused to be an informant for the dirty FBI — They wanted him to be one of their operatives at the Jan. 6 Trump rallies. He refused them so they stormed his home at 3:45 PM on Thursday, September 30th, and arrested him on bogus misdemeanor charges.

The FBI sent 20 vehicles to his home to make the arrest. DHS and Pinellas County law enforcement were also present. The FBI was in Jeremy’s home for 5-and-a-half hours looking for evidence. We were told the FBI did not read Jeremy Brown his rights.

The same FBI agents who attempted to recruit him for January 6 were at his arrest months later.

Today, Jeremy is still being held without bail for a charge of trespassing! While others in NYC, & other places, with a history of violent crimes, are out with no, or very little, bail Jeremy Brown is still sitting in jail for committing a misdemeanor on Jan. 6, 2021.  Jeremy entered the imaginary no-go zone around the US Capitol that was not marked and where police officers were waving Trump supporters in.  Jeremy also is on film saving a woman’s life from the Capitol Police that day.  He did not enter the US Capitol. This is a clear violation of the US Constitution and international law.

Chris Wray and his FBI minions have arrested over 800 Americans over the January 6 protests and riot. Wray and the FBI have threatened, harrassed, and abused thousands more for attending the rallies and walking in their pretend perimeter.

Wray and the FBI have still not come clean on the number of operatives and cut-outs they had hired to work at the US Capitol and initiate the rioting that day.

Ray Epps leading the mob to the US Capitol

But today Chris Wray joined the head of MI5 to make a joint statement on Communist China.

What a strange development? Since when does the FBI care about real threats facing the country?

The heads of Britain and America’s intelligence agencies have promised more investigations into China as they jointly warned the world faces a ‘game changing challenge’ from the ruling communist party.

Director general Ken McCallum said MI5 is running seven times as many investigations into China as it was four years ago, and plans to ‘grow as much again’ to tackle the nation’s widespread attempts at interference.

In an unprecedented joint address with the director of the FBI, Christopher Wray, at MI5’s Thames House headquarters in London on Wednesday, business leaders and academic chiefs also heard warnings that a Chinese takeover of Taiwan could ‘represent one of the most horrific business disruptions the world has ever seen’.

In their historic speech, the security chiefs warned of China’s ruling community party, headed up by President Xi Jinping, attempting to ‘covertly apply pressure across the globe’.

And at the same time Joe Biden is talking about dropping China tariffs.

You just can’t make this up.