US Marines Ask Court For Relief From COVID-19 Vaccine Mandate 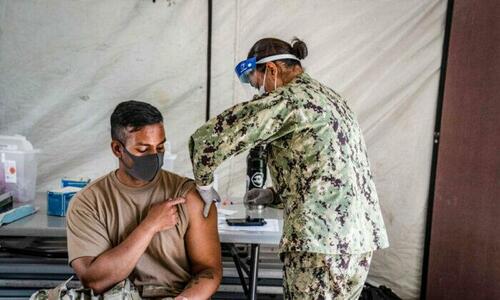 US Marines Ask Court For Relief From COVID-19 Vaccine Mandate

Several members of the U.S. Marine Corps filed an amended complaint seeking relief from the Department of Defense’s COVID-19 vaccine mandate for service members, claiming they were denied religious exemptions.

The complaint was filed (pdf) in the U.S. District Court Middle District of Florida against the Defense Department, Secretary Lloyd Austin, and Gen. David H. Berger, the head of the Marine Corps.

“The plaintiffs are Marines who face a deadline to receive an injection that violates their sincerely held religious beliefs since all of the COVID shots are associated with aborted fetal cells,” said a news release from Liberty Counsel, which filed the claim on 15 Marines’ behalf.

Those Marines, the release added, “have been refused any religious exemption or accommodation,” although the deadline to receive the vaccine has long passed. “These dates have passed, and disciplinary actions have already commenced,” it said.

Now, the Marines are seeking relief to prevent them from facing court-martials, dishonorable discharges, or other demeaning measures, according to the group.

“As we prepare to celebrate Independence Day, we must continue to fight for the freedom of those who protect us every day. No service member should be forced to choose between serving God and serving country,” Liberty Counsel Founder and Chairman Mat Staver said in a statement. “The Department of Defense continues to violate the law and ignore their religious freedom. This lawlessness must end.”

Since the Defense Department handed down the COVID-19 vaccine mandate for service members in August last year, numerous lawsuits have been filed. Two months ago, for example, a former Marine Corps captain filed a suit in the Eastern District of Texas and alleged the mandate is unlawful.

“The heart of the claim is that these are not vaccines,” former Marine Corps Capt. Dale Saran told The Epoch Times in late May about the suit. “They don’t have any live virus in them; the only thing that makes them even remotely related to a vaccine is the route of administration—a shot through a needle.”

And in March, U.S. District Judge Reed O’Connor blocked the military’s vaccine mandate for all Navy members who were seeking religious exemptions to the shot.

“Each is subject to the Navy’s COVID-19 vaccine mandates. Each has submitted her religious accommodation request, and none has received accommodation,” according to his order. “Without relief, each servicemember faces the threat of discharge and the consequences that accompany it. Even though their personal circumstances may factually differ in small ways, the threat is the same—get the jab or lose your job.”

That ruling came days before the U.S. Supreme Court sided with the Pentagon in that case, temporarily granting the department’s request to allow top Navy officials to consider a Navy service member’s vaccination status on deciding whether they should be deployed.

The Epoch Times has contacted the Department of Defense for comment on the Liberty Counsel-backed complaint.