TRAINWRECK: Biden Calls Out Woman in the Crowd During Ohio Speech But She Already Left (VIDEO) 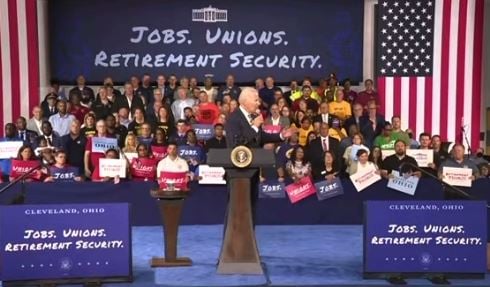 Joe Biden traveled to Cleveland, Ohio today to lie about the economy to a group of union supporters at Max Hayes High School.

“We made incredible progress on the economy from where we were a year-and-a-half ago. We’ve got a long way to go because of inflation, because of the, I call it the Putin tax increase, the Putin, because of gasoline… I’m fighting like hell to lower costs on things,” Biden said.

Here is a look at the inflation rate before and after Joe Biden came into office.

Don’t count on the mainstream media to call out Joe Biden on his lies.

During his talk Joe Biden also gave a shout-out to a woman in the audience.

But she already left.

The post TRAINWRECK: Biden Calls Out Woman in the Crowd During Ohio Speech But She Already Left (VIDEO) appeared first on The Gateway Pundit.