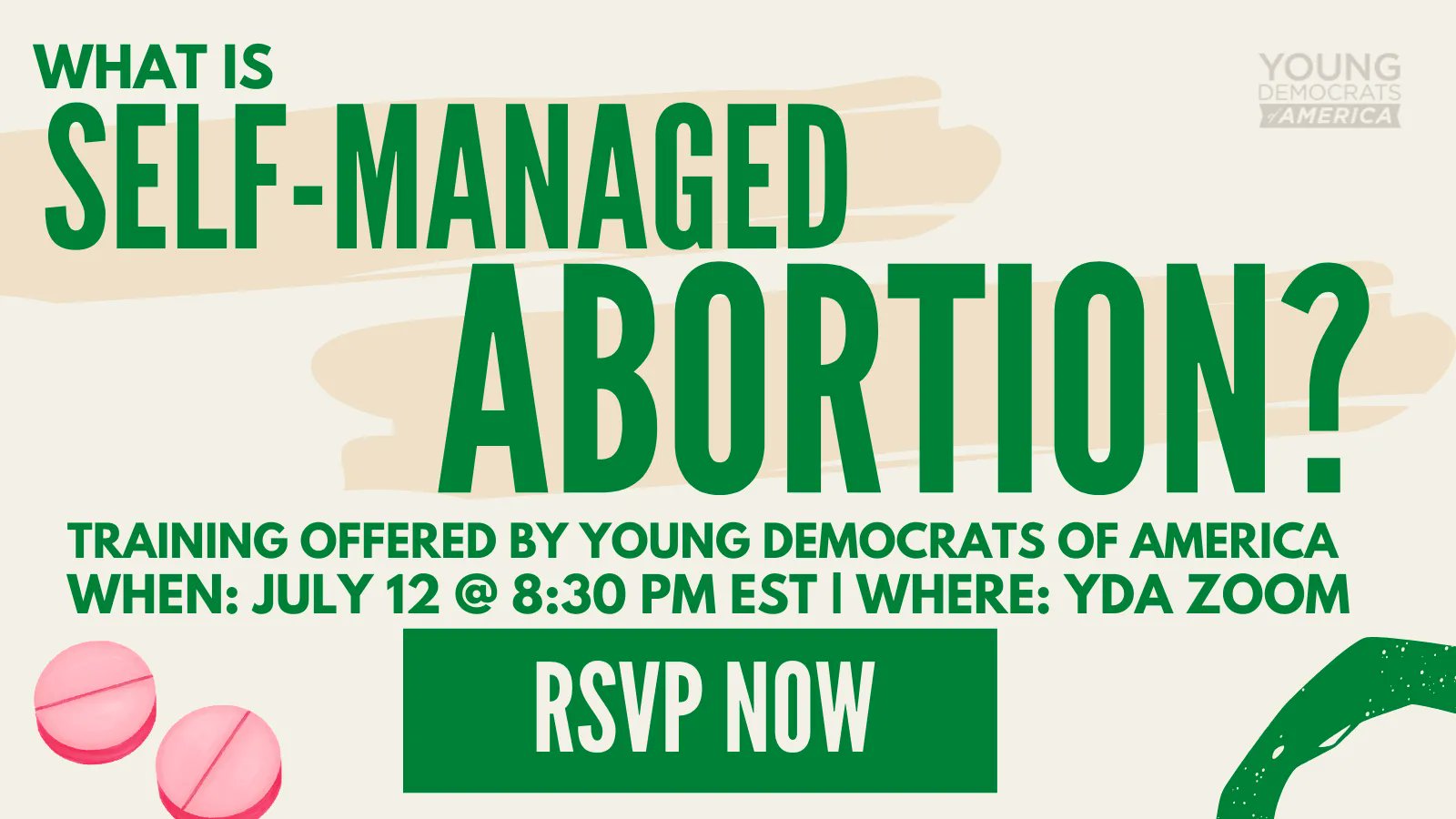 An upcoming event hosted by Young Democrats of America (YDA) advertises a “training” event on “What Is Self-Managed Abortion?”

The far-left group is doubling down on its focus of continuing to kill unborn children and now enabling members of its party to do so independently.

A tweet from YDA last Thursday said they were “thrilled” to educate people on how women can have a “self-managed abortion.”

To do our part in a post-Roe world and give our members all of the info they need, we’re thrilled to partner with a reproductive rights professional to present an information-sharing session about what self-managed abortion is on July 12th at 8:30. RSVP: https://t.co/FlnOgfCXUt pic.twitter.com/xnbilTzVsL

The post reads, “To do our part in a post-Roe world and give our members all of the info they need, we’re thrilled to partner with a reproductive rights professional to present an information-sharing session about what self-managed abortion is on July 12th at 8:30.”

It then gave a link to register for the event.

The tweet garnered a lot of attention from folks. Some pointed out the hypocrisy of being against taking Ivermectin to treat coronavirus.

Apparently back alley abortions are things they actually encourage https://t.co/ebbA042TSC

Other users on Twitter called in “pure evil” and “demonic.”

Another user said, “I don’t care how you feel about the legality of abortion if you are for this you are for a radical culture that is anti humanity and pro death.”

More information is available on the group’s Facebook post advertising the event, saying the YDA is “thrilled” to offer the event.

The Facebook post says, “We stress that this session does not replace advice or information from medical or legal professionals but will serve as a good foundation as we go forward in these difficult times.”

“We will also end with a section on criminalization and a Q&A so please come prepared with your questions!,” it says.

Interestingly enough, there is currently no law that will prosecute a woman for having an abortion. Those laws only apply to providers and drug companies who provide medication abortions in states where they do not follow the proper, lawful distribution.

Abortion rates have increased, thanks to the medication abortion method.

Not only is this method conducted without medical supervision, but a woman is going into labor at home to give birth to a dead baby that was killed chemically. It is far more dangerous than surgical abortions in hospitals or clinics.

Side effects and risks associated with this method include abdominal pain, nausea, vomiting, diarrhea, weakness, fever/chills, and headaches. The bleeding may last for weeks after the abortion.

“The [Justice Department] strongly supports efforts by Congress to codify Americans’ reproductive rights, which it retains the authority to do. We also support other legislative efforts to ensure access to comprehensive reproductive services,” Garland said in the statement Friday.

“And we stand ready to work with other arms of the federal government that seek to use their lawful authorities to protect and preserve access to reproductive care,” he added. “In particular, the FDA has approved the use of the medication Mifepristone. States may not ban Mifepristone based on disagreement with the FDA’s expert judgment about its safety and efficacy.”

Last December, the Biden administration’s Food and Drug Administration (FDA) made chemical abortion available to all women without a visit to a doctor and through the mail nationwide.