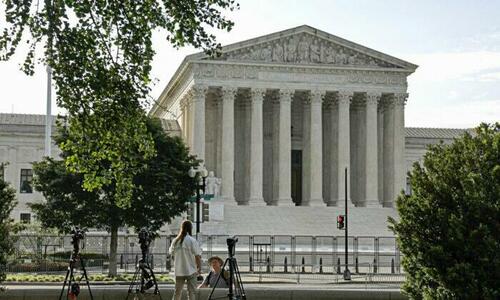 Authored by Zachary Stieber via The Epoch Times (emphasis ours),

The Supreme Court’s June 24 decision to strike down Roe v. Wade, delivering the ability to regulate abortions back to the states, will motivate a variety of voters, according to a new poll.

The move will make some voters more likely to vote Republican in the upcoming midterm elections, but will drive others to Democrat candidates, according to the survey.

The remaining respondents said the decision, which struck down the court’s 1973 decision that declared access to abortion was a constitutional right despite not being mentioned in the Constitution, will have no effect on how they vote in the midterms.

Presidential elections are held every four years; the elections held in between them are known as midterms. Along with featuring all members of the U.S. House of Representatives, voters will choose some U.S. senators and many state lawmakers and other politicians.

The Harvard–Harris poll was conducted on June 28 and June 29 among 1,308 registered voters. The margin of error and breakdown of party affiliations were not provided.

Democrats are much more likely to support easy access to abortion and few, if any, restrictions on getting or performing abortions. Republicans are largely in favor of restricting or outright banning abortion. In some cases, GOP lawmakers support criminal penalties for health care workers who perform abortions in violation of state laws.

Another recent poll indicated that Democrats may have more to gain from the Supreme Court’s ruling.