Are US Gasoline Refiners Running Out Of Steam?

Are US Gasoline Refiners Running Out Of Steam?

U.S. refineries have been operating at or near maximum utilization levels in recent weeks as demand recovers. Petroleum stocks are sitting at multi-year lows, and refining margins are sky-high.   Refinery utilization at 95% is at its highest since before COVID—September 2019. Yet, refiners don’t have much room to safely raise capacity usage further, while the summer season with heat waves and hurricanes could suddenly take some capacity off the market, further straining gasoline supply and putting upward pressure on gasoline prices.

Refiners are running crude processing at full tilt. They are responding to U.S. President Joe Biden’s continuous pestering to produce more gasoline and lower prices at the pump, immediately, saying that there isn’t much spare capacity left to boost utilization rates without compromising safe operations. Analysts are of the same opinion, too.

More Relief At The Pump On The Way?

A recent drop in international crude oil prices, which saw in June their first monthly drop since November 2021, coupled with lower gasoline demand and growing stocks in the past two weeks, have helped the average U.S. gasoline price ease back to below $5 a gallon, at $4.807 on July 4, down from a record-high of $5.016 on June 14.

“Gas demand currently sits at 8.93 million b/d, which is lower than last year’s rate of 9.11 million b/d at the end of June. On the other hand, total domestic gasoline stocks increased by 2.6 million bbl to 221.6 million bbl. These supply/demand dynamics and decreasing oil prices have pushed pump prices lower. As these trends continue, drivers will likely continue to see relief at the pump,” AAA said last week, just before the July 4 holiday weekend.

The trend of high gasoline production is set to continue in the near future as refiners run at full tilt to take advantage of the high refining margins. The crack spreads are well above historical averages due to low inventories both in the U.S. and globally, fuel demand rising to near pre-pandemic levels, and lower product exports from Russia, the Energy Information Administration said last month. The EIA expects America’s refinery utilization to reach a monthly average level of 96% twice this summer, “near the upper limits of what refiners can consistently maintain.” 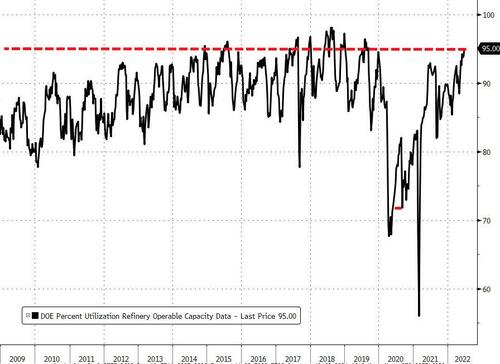 In its June Short-Term Energy Outlook (STEO), the administration forecast that U.S. refinery utilization would be relatively high this summer in response to strong wholesale prices for petroleum products. These petroleum product prices have increased more than the price of the crude oil used to make them.

In the week of June 24, the average U.S. refinery utilization rate stood at 95%, with the East Coast and Gulf Coast rates at 98%, per EIA’s latest weekly report. It should also be noted that operable capacity across America’s refineries is now 17.944 million bpd, down by 1 million bpd compared to 18.976 million bpd two years ago. Several refineries have either shut down or started preparations to produce biofuels since the pandemic crashed fuel demand and posed uncertainty about the long-term business case for refiners.

Risk Of Unexpected Outages Are Higher At Top Utilization Levels

Testing the upper limits of refinery utilization could wear down processing units faster and requires more cooling of the equipment, especially in hot weather, according to Campbell.

A sudden outage at a refinery this summer could exacerbate the fuel crunch as it would lower already low inventories.

If one or more of those expected major hurricanes make landfall along the U.S. Gulf Coast, where a lot of refining capacity is located, some refiners could be forced to preventively shut down or could be at risk of flooding, which would additionally tighten the fuel market in the United States.

Currently, U.S. refiners are producing at or near maximum levels, and they reiterated this in a letter last month in response to President Biden’s call to produce more gasoline and lower gasoline bills for American consumers.

“Without corresponding increases in crude oil production, any benefit from incremental refining capacity would be essentially nullified by the increased crude oil demand and likely higher price,” the presidents of the American Fuel & Petrochemical Manufacturers (AFPM) and the American Petroleum Institute (API) wrote in a letter to the President.

“That’s why it’s important to increase crude oil production. This global crude oil supply issue is not likely to be solved quickly, even if more refining capacity were available,” they say.