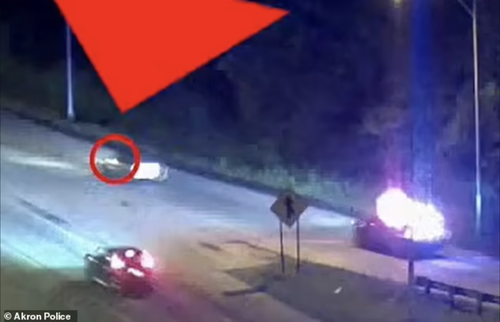 Amid community protests over Akron police officers’ fatal shooting of 25-year-old Jayland Walker on June 27, the Akron Police Department on Sunday released officer body-camera video of the incident, which started with an alleged traffic violation and ended in a huge eruption of fire from eight officers who were chasing him on foot.

While unarmed at the moment of the shooting, police say Walker fired a shot from his vehicle during the car chase that preceded the foot pursuit. They also say they found a pistol in his car and a shell casing near the site of Walker’s alleged shot.

Police say officers attempted to stop Walker’s vehicle in Akron’s North Hill section for unspecified traffic and equipment violations. He refused to stop and, about 40 seconds into the ensuing car chase, “a sound consistent with a gunshot can be heard on the body-worn cameras of the officers,” the police video narrator says.

In the video, one of the two officers in the car can be heard saying “shots fired,” and one proceeds to notify dispatch that a shot came out the suspect’s car. Akron police point to what they say is a flash of light visible at the same time.

The pursuit continued for several minutes, first on a freeway and then on city streets, with speeds reaching 80 miles per hour. Walker’s silver Buick eventually slowed to a crawl, and video shows him exiting through the passenger door while wearing a ski mask.

Police say that, as Walker ran, he turned and faced officers momentarily before continuing. Soon after, police unsuccessfully tried stopping him with Tasers.

Walker continued running, and as he reached a parking lot, police say he quickly turned toward the chasing officers. “Officers reacted by discharging their firearms, striking the suspect,” says the police video narrator.

Akron police chief Stephen Mylett said the video imagery gives the appearance that Walker is reaching for his waist, and that it captures what appears to be a “forward motion of his arm.” Officers told investigators they perceived that Walker had turned and appeared to be moving into a firing position.

An enormous volume of gunfire is heard on the video before shouts of “cease fire.” The number of shots fired is unknown.”However, based on the video, I anticipate that number to be high,” said Mylett. “A lot of rounds were fired, and I will not be surprised if the number at the end of the investigation is consistent with the number that has been circulating in the media.” That number is 90.

NOW – Police have released bodycam footage of the shooting of Jayland Walker in Akron, Ohio.

Walker was unarmed at the time of the shooting, but a gun was found in the car, police says. pic.twitter.com/9oREYZycIo

Early indications are that Walker may have been struck 60 times. Mylett said the precise number of impacts is unknown as medical examiners sort out the entrance and exit wounds.

The video appears to show that police continued firing their weapons after Walker had crumpled to the ground and after seemingly dozens of rounds had been fired. In all, eight officers opened fire and have been put on leave pending the investigation, as is customary.

Police shared a photo of a pistol they say was found in plain view on the driver’s seat of Walker’s car, along with a loaded magazine and a gold ring. They also said that, after the chase and shooting, investigators found a shell casing near the site of Walker’s alleged weapon-firing that’s consistent with the weapon found in the car.

Akron authorities echoed the Walker family’s urging that protests remain peaceful, and asked for the public’s patience during the investigation of the incident.

AKRON OH: Local reporters report a handful of protesters outside of Akron police headquarters have attempted to tear down barricades and tear gas has been deployed, unlawful assembly declared