The Economic Implications Of The US Urban Exodus

The Economic Implications Of The US Urban Exodus

The Urban exodus documents here extensively over the past two years has had profound consequences on the US economy.

Starting with the pandemic, and subsequently accelerating due to the historic riots, unprecedented lawlessness and historic crime rates unleashed by democratic administrations in major US metroareas, urban exodus has had a “Donut Effect,” causing greater domestic migration out of urban counties and into the surrounding suburbs. At the same time, increased adoption of hybrid work and remote work have shifted the geographic location of demand for food and other services. The resulting temporary geographical mismatch in labor demand and supply could take time to resolve.

Addressing the topic of economic implications from urban exodus, a recent note from BofA economist Stephena Juneau writes that the labor market is in the midst of one of the most rapid recoveries in history. After falling by more than 21M from February 2020 to April 2020, private payrolls are now just about 200k below pre-pandemic levels. But this labor market recovery has been marked by substantial geographical variation. The growth in private employment has been much lower in bigger city centers compared to the surrounding suburbs.

In its note (available to professional ZH subscribers), BofA digs deeper into this geographic variation by focusing on 11 of the largest Metropolitan Statistical Areas (MSA)—New York, Los Angeles, Chicago, Boston, Dallas-Fort Worth, Houston, Miami, Philadelphia, Washington DC, Atlanta and San Francisco. The recovery of private employment in these city centers has lagged behind the recovery in the surrounding suburbs (yet another failing by mostly Democratic cities). Indeed, BofA finds that aggregate private payrolls in the urban counties are down 3.8% from the pre-pandemic level in 2019 Q4 (Exhibit 1). Meanwhile, the surrounding suburbs have seen only a 1.5% drop in private employment. 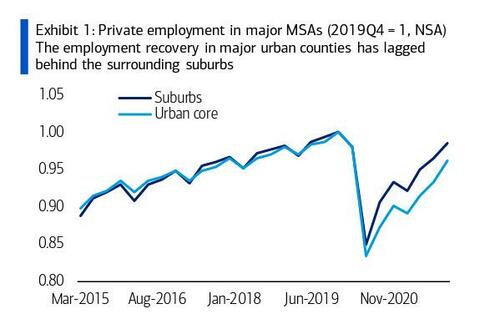 The scientific name for the migration from cities to suburbs was given by Ramani and Bloom (2021) as “the Donut effect.” Data from William H. Frey at the Brookings institute on the basket of 11 MSAs lends support to this effect. It shows that urban counties have seen a significant decline in domestic migration and a decline in overall population. 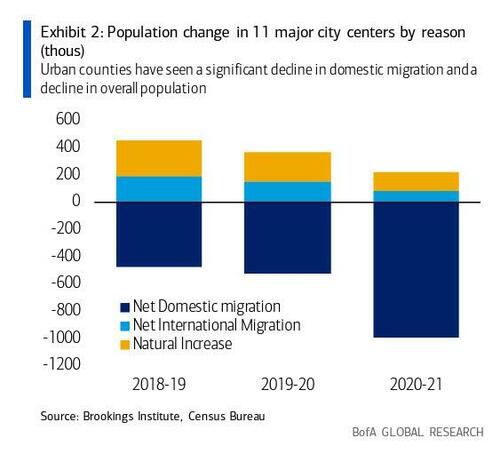 Suburbs, on the other hand, experienced an increase in domestic migration based on change of address data from USPS. One of the main reasons for this is that businesses are adopting official remote work or hybrid work policies (the other big reason(s) is that most big cities have become socialist hellholes “worse than Afghanistan”, as even Ken Griffin recently declared before fleeing the Democratic bastion of Chicago for Miami). 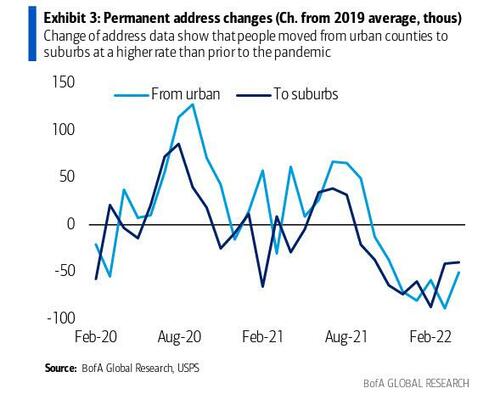 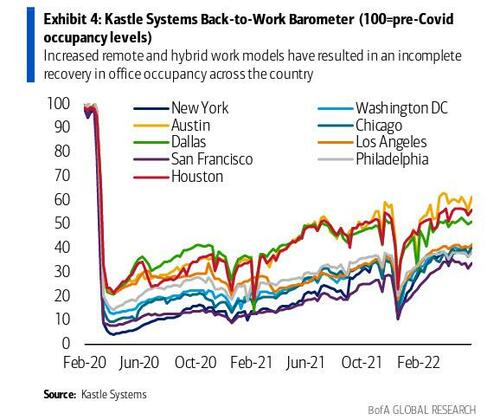 The population shift and the drop in full time commuters has led to decreased mobility towards “retail & recreation” in the city centers as compared to the suburbs. To a large extent, businesses in the leisure/hospitality sector in the city centers like restaurants, cafes, retail stores depend on the workers who commute there during the week. Additionally, revenue from tourism that feeds into these sectors hasn’t picked up to its pre pandemic trend yet. This has caused a shift in labor demand from the city centers to the suburbs, helping cause a weaker job recovery in cities. Combine this with workers leaving the labor force and the labor shortage is particularly high in the suburbs.

Mismatches in the labor market add to the supply constraints on the economy. Hence they are part of the ongoing supply-driven inflation. In economic jargon, if they persist they raise the inflation neutral unemployment rate. In BofA’s view, this could take some time to resolve. It is hard for low wage workers to follow jobs into the suburbs because of limited low cost housing. As workers start spending a bit more time in the office, that will help ease the imbalance, but a return to the old living and commuting patterns is highly unlikely.

This geographical shift will eventually cause the businesses in the leisure and hospitality space in the city centers to either downsize/close or shift operations to the suburbs to meet the increased demand there.

The broader mismatch between labor supply and demand should also slowly improve. A recent survey conducted by Indeed shows that job seeker interest in high-touch jobs is in fact rebounding. This should help in resolving the geographical labor demand-supply mismatch. So the Fed will get some help in rebalancing the labor market, but they still need to bring job growth down below 100k and engineer a moderate upward shift in the unemployment rate. Then again, with even Zuck warning that mass layoffs are coming, we may be just a few days away from a “shock” negative jobs print.