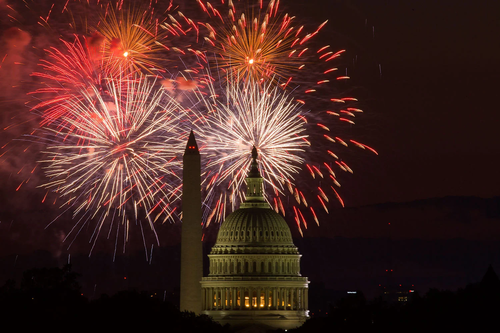 In prior years before there was a war on in Eastern Europe, it was customary for the Russian president to send a congratulatory commemorative message to the US president marking the July 4th holiday.

As perhaps expected given the Ukraine invasion and Washington’s unprecedented sanctions against the Russian state and economy, including on Vladimir Putin himself, the Russian leader won’t congratulate Biden this year, according to a Monday Kremlin statement.

“This is because this year, the U.S.’ unfriendly political discourse towards Russia has reached its culmination point,” Kremlin spokesman Dmitry Peskov told reporters, as cited in Interfax. He called it “hardly appropriate” at this time.

“Under this circumstance, sending such a congratulatory message is hardly appropriate,” he explained.

Not only have US-Russia relations reached a historic low-point of late, but there’s not even the basic level of diplomacy and communications one might expect as part of efforts to end the Ukraine war and achieve a ceasefire.

Instead, the Biden administration has approved wave after wave of billion dollar weapons packages, also while signaling Ukrainian President Volodymyr Zelensky to take a hardline ‘no compromise’ stance in refusing the possibility of any territorial concessions for the sake of ending the war.

The Moscow Times observes of where things stand between Moscow and Washington in the following:

In March, Russian Deputy Foreign Minister Sergei Ryabkov said the relationship between the Kremlin and the White House was “on the verge of a breakup.” Ryabkov said that the only way to “save” it would be for the U.S. to halt the supply of weapons to Ukraine and, instead, “project positive influence on Kyiv.”

But as for the type of warmer, relaxed relations which might have allowed for exchanges of congratulatory holiday messages, that hasn’t happened since 2020.

Putin sent his last Independence Day message to Washington during that year of the Trump presidency, at a moment relations were already sliding in large part due to ‘Russiagate’ related election interference accusations being lobbed at Moscow.