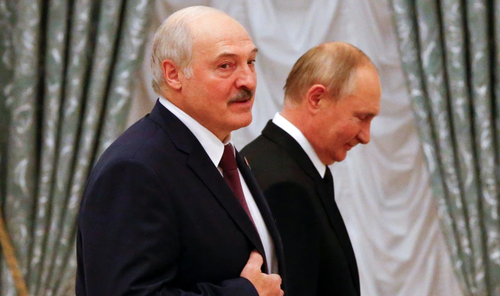 Russian President Vladimir Putin said Friday that sanctions and other pressure from the West have sped up the “unification process” for Russia and Belarus.

The two nations signed an integration treaty in 1997. The process has been sped up since the US and its allies rejected the result of Belarus’ 2020 presidential election that saw Alexander Lukashenko win another term.

After the election, the US and EU started imposing sanctions on Belarus and threw support behind an exiled opposition leader. As a result, Lukashenko drew closer to Putin, and Russia was able to launch the initial phase of its invasion of Ukraine from Belarusian territory.

Since the invasion, the West has targeted Belarus with the same sanctions Russia is being hit with. Putin said the pressure was “pushing us to speed up the unification process.”

“After all, acting together it’s easier to minimize the damage from illegal sanctions, it’s easier to start production of products that are in demand, develop new competencies and expand cooperation with friendly countries,” the Russian leader said.

Under the 1997 agreement, known as the Union State, Russia and Belarus would remain separate sovereign states, but people living in each country would get citizenship for the other and would be able to travel freely.

Russia and Belarus are also stepping up military cooperation, and Putin said this week that he will send nuclear-capable Iskander-M missiles to Belarusian territory. Putin also plans to help Belarus upgrade its fighter jets, so they are capable of carrying nuclear weapons.