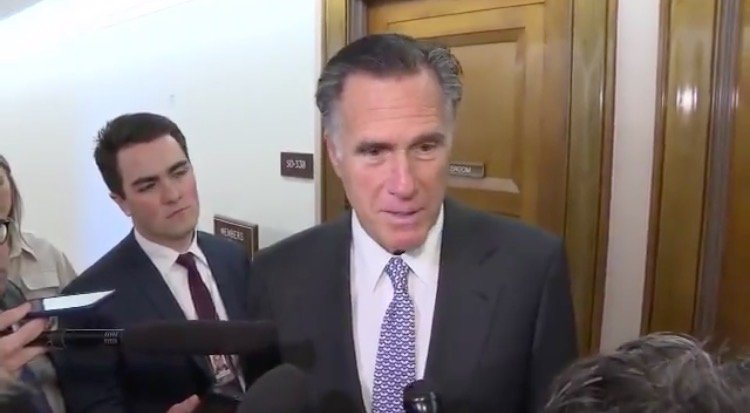 RINO Senator Mitt Romney, AKA, “Pierre Delecto,” attacked Trump in a scathing op-ed in The Atlantic and warned the nation is at risk.

According to Romney, the nation isn’t at risk of collapse because of globalist puppet Joe Biden and his Marxist agenda — It’s Donald Trump’s fault for dividing the country.

“Too many Americans are blithely dismissing threats that could prove cataclysmic.” the failed presidential hopeful wrote in a July 4 op-ed.

Romney, who owns at least two sprawling mansions and flies in private jets, started off by wringing his hands over the ‘climate change crisis,’ droughts and melting ice caps.

“As the ice caps melt and record temperatures make the evening news, we figure that buying a Prius and recycling the boxes from our daily Amazon deliveries will suffice.” he wrote.

Mitt Romney attacked Trump supporters and said we are a “nation in denial.”

And when a renowned conservative former federal appellate judge testifies that we are already in a war for our democracy and that January 6, 2021, was a genuine constitutional crisis, MAGA loyalists snicker that he speaks slowly and celebrate that most people weren’t watching.

What accounts for the blithe dismissal of potentially cataclysmic threats? The left thinks the right is at fault for ignoring climate change and the attacks on our political system. The right thinks the left is the problem for ignoring illegal immigration and the national debt. But wishful thinking happens across the political spectrum. More and more, we are a nation in denial.

I have witnessed time and again—in myself and in others—a powerful impulse to believe what we hope to be the case. We don’t need to cut back on watering, because the drought is just part of a cycle that will reverse. With economic growth, the debt will take care of itself. January 6 was a false-flag operation. A classic example of denial comes from Donald Trump: “I won in a landslide.” Perhaps this is a branch of the same delusion that leads people to feed money into slot machines: Because I really want to win, I believe that I will win.

“President Joe Biden is a genuinely good man, but he has yet been unable to break through our national malady of denial, deceit, and distrust. A return of Donald Trump would feed the sickness, probably rendering it incurable. Congress is particularly disappointing: Our elected officials put a finger in the wind more frequently than they show backbone against it. Too often, Washington demonstrates the maxim that for evil to thrive only requires good men to do nothing.” Romney wrote in the penultimate paragraph of his op-ed.

I hope for a president who can rise above the din to unite us behind the truth. Several contenders with experience and smarts stand in the wings; we intently watch to see if they also possess the requisite character and ability to bring the nation together in confronting our common reality. While we wait, leadership must come from fathers and mothers, teachers and nurses, priests and rabbis, businessmen and businesswomen, journalists and pundits. That will require us all to rise above ourselves—above our grievances and resentments—and grasp the mantle of leadership our country so badly needs.