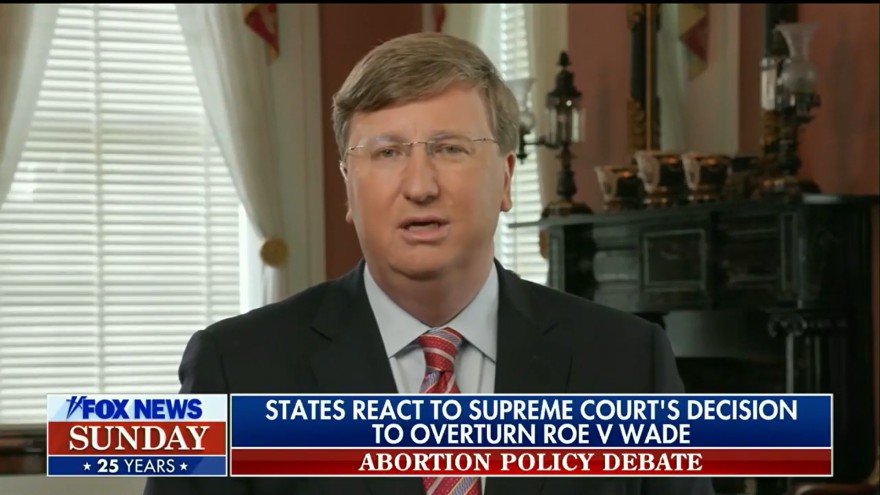 On Sunday, the Republican Governor of Mississippi, Tate Reeves, said that doctors in the state would lose their medical licenses for prescribing abortion pills after a new law takes effect on August 1.

Reeves made the statement during an interview on “Fox News Sunday” during a discussion about the recent reversal of Roe V Wade by the U.S. Supreme Court.

“If abortion is illegal in our state, which it is, then those medicines will not be allowed.” – @tatereeves on women in Mississippi receiving abortion medication through the mail. #FoxNewsSunday

He noted that any doctors practicing medicine in the state “whether it’s through telemedicine or otherwise” was going to be held to the “standards of care that we require in our state.” He further said those standards were also “based upon state law.”

Reeves went on to point out that Mississippi’s board of medical licensure would revoke the license of any doctor who violates the ban against abortion pills.

“And so if a physician is attempting to practice medicine in the state of Mississippi and they are violating our law, then our state board of medical licensure will pull the license from them,” he stated.

Reeves was asked about a proposed measure to allow the state’s strict abortion laws to make an exception for cases such as rape.

“I don’t believe that an exception for rape will make it through the Mississippi legislature and make it to my desk,” he responded.

Mississippi is not the only state making new laws regarding abortion pills.

Louisiana’s Governor John Bel Edwards signed a bill in June that makes mailing abortion pills a crime in his state. SB 388 prohibits “criminal abortion by means of the use of an abortion-inducing drug without the prescribing physician being physically present during the administration of the drug,” including a $1,000 fine and a maximum of six months in prison.

South Dakota Republican Governor Kristi Noem signed a bill to ban telemedicine abortion in March. HB 1318 prohibits “medical abortion by telemedicine and … increase the penalty for the unlicensed practice of medicine when performing a medical abortion.” Like Lousiana’s law, the person prescribing the medication must be present with the patient.

The study of all 50 states found that Louisiana and Mississippi saw the most requests for abortion pills over the last two years from Aid Access, an international nonprofit that provides access to medication abortion by mail. https://t.co/OYzz3zzg9T

The Guttmacher Institute reported that medication abortion accounted for 54% of US abortions by 2020.