Jan. 6 Political Prisoner George Tenney III Pleads Guilty to Two Junk Charges – Was Standing Next to Magnetic Doors When Government Employee Opened Them from the Inside 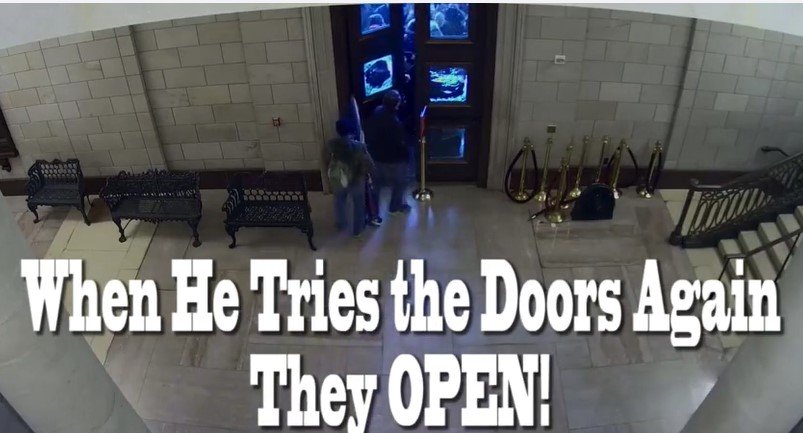 The magnetic doors on the US Capitol on January 6, 2021 — opened from the inside by a government official.

In May 2021 a member of the Oath Keepers called The Gateway Pundit to tell us his story of the January 6th protests and riot.

**  The Gateway Pundit reported nearly a year ago in May that the US Capitol doors were opened from  the inside.

The man was living in fear since the Jan. 6 protests at the US Capitol and wanted to get his story out.

The Oath Keepers is a non-partisan association of current and formerly serving military, police, and first responders, who pledge to fulfill the oath all military and police take to “defend the Constitution against all enemies, foreign and domestic.”

What he told us is truly shocking and has not been reported by the mainstream fake-news media.

According to this American patriot, a US Marine veteran who worked overseas at a US Embassy, the doors on the US Capitol are electronically controlled magnetic locked doors. And someone inside the security booth at the US Capitol opened the doors!

Here is what we were told.

Jim Hoft: And they were not opened from the outside?

Retired Marine: They were opened from the inside. Now one of the stories I read recently was that some Marine, some Marine Major, went inside and managed to run around and open up the doors. And I think that was on your website, as well. But here’s what I can tell you about magnetic locks. If a door is locked by a mag lock it cannot be opened from the outside or the inside unless the person controlling that door opens that door by turning off the magnetic lock which those doors according to the photos I took are equipped with.

Retired Marine: Now these magnetic locks, I worked in the American embassy overseas. They are very, very strong.

Jim Hoft: I’m sure and they, you would think at the US Capitol they would have top security there.

Retired Marine: Now to give you an idea how strong they are, you could tie a chain to the handlebars of the door and tie it onto a truck. And you can take off with the truck and it is probably going to rip the door handles off but it is not going to open that door. The only way those doors can be opened if they want to be opened is from inside a security booth that is also equipped with a magnetic lock.

Jim Hoft: Has this ever been reported?

Retired Marine: Not that I’ve heard of.

Jim Hoft: Oh my God, this is really big!

Retired Marine: If those magnetic locks had been engaged, in other words, if Capitol Police did not want people opening that door. Now I can understand they might say, “We had police outside so we didn’t want to engage them.” If they did not want those magnetic locks open, there is NOTHING, nothing, no person, no group of people, no hundreds of people who could have opened those doors. No one. Unless the Capitol Police wanted those doors open. As soon as those doors were open, I was lifted off my feet. There was a forward momentum.

The Gateway Pundit altered the voice quality at the request of this witness.

MORE– We received this follow-up email from a reader on magnetic doors. A fire alarm set off from the inside — which did not happen — can also unlock the doors.

Information on magnetic locks. Magnetic locks are strong. But according to safety, mag locked doors must have an egress option in case of fire or emergency exit. Therefore there are 2 options to allow mag locked doors to open. One is fire alarm. If fire alarm goes off, mag locks will unlock if wired correctly. The second option is a REX sensor. (Request to exit). Rex sensor is an interior ceiling mounted (normally) proximity sensor.

Both of these options involve someone on the inside opening the doors.

Free State Kansas later published video of the magnetic doors being opened from the inside of the US Capitol.

It is clear the doors were open from the inside.

In February 2022 Defense Attorney Jonathon Moseley confirmed in his letter to corrupt federal prosecutors that the magnetic Columbus Doors were opened from the inside on January 6, 2021.

It was all a setup. Kelly Meggs and other members of the Oath Keepers could not have done one of the major things of which they are accused by federal prosecutors: force their way into the U.S. Capitol Rotunda on Jan. 6, 2021, through the famous Columbus Doors, a defense attorney says.

The two sets of historic doors that lead into the Rotunda were opened by someone on the inside, and not his client, says defense attorney Jonathon Moseley.

Department of Justice video widely circulated on Twitter this week shows a man trying to open the inner doors by leaning against them, before turning around as if listening to someone, then returning to the entrance and opening the left door for protesters.

“The outer doors cast from solid bronze would require a bazooka, an artillery shell or C4 military-grade explosives to breach,” Moseley wrote in a letter to federal prosecutors. “That of course did not happen. You would sooner break into a bank vault than to break the bronze outer Columbus Doors.”

The 20,000-pound Columbus Doors that lead into the Rotunda on the east side of the U.S. Capitol are secured by magnetic locks that can only be opened from the inside using a security code controlled by Capitol Police, Moseley wrote in an eight-page memo.

“Imagine how the prosecution will prove at trial what cannot be proven because it is not true,” Moseley wrote to prosecutors Jeffrey S. Nestler and Kathryn Leigh Rakoczy of the U.S. Attorney’s Office for the District of Columbia.

George Tenney was standing near the magnetic doors when they were opened from the inside.

He faces up to 25 years in prison for “civil disorder” and “obstruction” charges.

Tenney was standing at the doors when they were unlocked by a government official and Trump supporters were allowed into the building.

The Biden regime would have loved to have charged George Tenney with opening the doors but they couldn’t. A government official did that.

God save us from this evil regime.

The post Jan. 6 Political Prisoner George Tenney III Pleads Guilty to Two Junk Charges – Was Standing Next to Magnetic Doors When Government Employee Opened Them from the Inside appeared first on The Gateway Pundit.