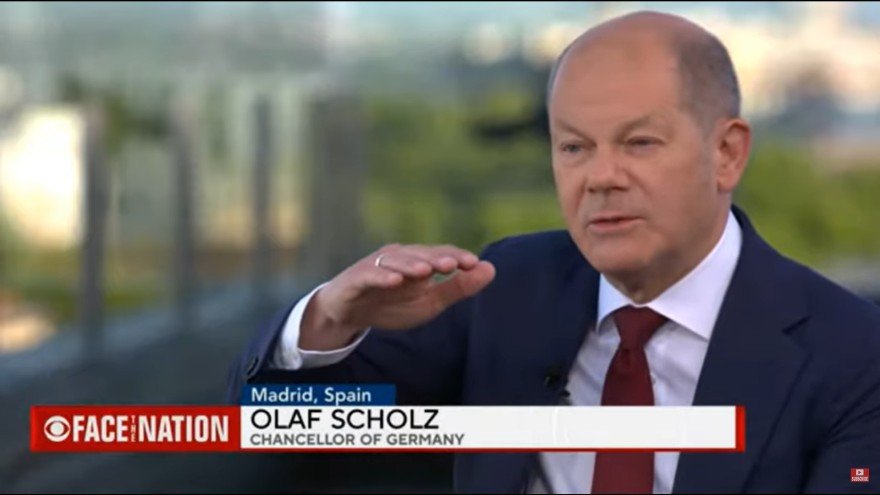 It appears the resolve of Western leaders points to a much longer and more expensive engagement in Ukraine, signaling that Biden will be sending more money to the war-torn region.

Scholz made the comments during an appearance on CBS’s Face the Nation on Sunday morning. The German chancellor told anchor Margaret Brennan that Putin had begun preparing to invade the neighboring nation of Ukraine at least one year prior to launching his military invasion.

Scholz told Brennan that the preparation time allowed Putin to collect and arrange the resources he needed to engage in a prolonged war.

Brenna asked Scholz when he felt Putin might run out of resources for the war. His simple response: “No one really knows.”

“He has — he is perhaps the leader of a very great country with a lot of people living there, with a lot of means, and he is really doing this brutal war with — and he prepared for it [for] very long,” he continued. “I think the decision to — to do this war was taken one year before it started or possibly earlier because he prepared for it. And so, he will be able to continue with the war really a long time.”

Scholz then highlighted the fact that Germany, the United States, and others backing Ukraine also had the resources to continue supporting Ukraine for as long as it takes. The comment alludes to the idea that Biden will continue to send billions of dollars to Ukraine, which has become a proxy war for our nation.

“This is the message we say to [Putin]: We are able to support the Ukraine as long as necessary for defending its serenity, the democracy, the rule of law and all the things the people in Ukraine are looking for,” Scholz said.

When Brennan asked how long Scholze thought the war might last, he said, “The conflict will end when Putin understands that he will not be successful with the idea to conquer part of the territory of his neighbor.”

So far, the U.S. has sent more than $63 billion in aid to Ukraine, and it appears that the number will continue to rise.

On Friday, The Biden administration announced another $820 million in new Ukraine military aid, including advanced mid to long-range air defense systems and counter-artillery radars to defend against Russia’s invasion in the proxy war.

Western countries have suffered with massive shortages in grain, oil, food and fertilizer as the war rages on.

Gas prices are so high in Germany today that wood-burning stoves and firewood have become scarce nationwide.

German citizens are loading up on wood to heat their homes next year — just like they did in the Middle Ages.

Apparently, German politicians are as inept as the crazy Democrats and their RINO couterparts in America.

The Ukraine war and concerns about the energy supply have unsettled many citizens. The result: wood-burning stoves are in demand like never before. But even an oven does not guarantee heat if there is no firewood.

Wood-burning stoves and firewood have become scarce nationwide in the wake of the Ukraine war. Furnace builders and installers can hardly save themselves from orders from concerned customers who want to install an additional heating option in their house or apartment.

“When the war broke out, demand exploded,” says a spokesman for the Central Association for Sanitary, Heating and Air Conditioning (ZVSHK) in Sankt Augustin on request.

But even a stove does not guarantee a warm living room next winter: because the firewood dealers are also faced with a nationwide rush of customers and can no longer meet the exorbitantly increased demand in many places. “The market is empty,” says Gerd Müller, head of the office of the Federal Firewood Association in Kamen.

The triggers are obviously both the skyrocketing gas and heating oil prices as well as the concern that the heating could remain cold next winter. “People are unsettled or even scared,” says the Central Association for Sanitary, Heating and Air Conditioning. At least some customers will probably not get their stove before the end of next winter. According to the ZVSHK, the waiting time is a year in some cases. There are around 2,000 furnace construction companies nationwide.

The post Despite the Economic Devastation German Chancellor Scholz Says Western Leaders Can Support Ukraine ‘As Long As Necessary’ appeared first on The Gateway Pundit.