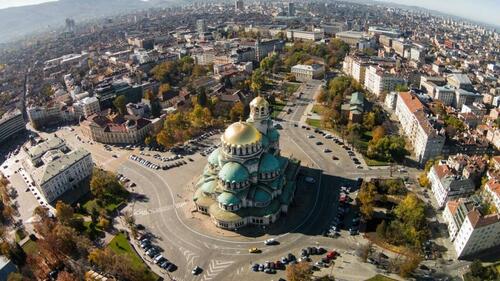 Russia’s says it’s preparing to respond in kind after Bulgaria expelled up to 70 Russian diplomats from its territory on Sunday. Starting June 28, the Bulgarian government declared that Russian diplomats in the eastern European NATO country “persona non grata” as they were “working against” Sofia’s interests, and they were given until July 3rd to depart Bulgaria.

Bulgaria’s acting Prime Minister Kiril Petkov said, “Anyone who works against the interests of Bulgaria will be called to go back to the country from which they came.”

The Associated Press confirmed on Sunday that “Two Russian airplanes were set to depart Bulgaria on Sunday with scores of Russian diplomatic staff and their families amid a mass expulsion that has sent tensions soaring between the historically close nations, a Russian diplomat said.”

Russia’s ambassador to Bulgaria had earlier stated that Moscow is ready to close its embassy in Sofia altogether in retaliation for the expulsions. Amb. Eleonora Mitrofanova issued Bulgaria an ultimatum days ago, saying, “I intend to urgently raise before the leadership of my country the issue of the closure of the Embassy of Russia in Bulgaria, which will inevitably lead to the closure of the Bulgarian diplomatic mission in Moscow.”

Meanwhile, Moscow is celebrating the complete capture of the cities of Lysychansk and Severodonetsk, effectively bringing the whole of Luhansk province under Moscow control. Crucially, Kremlin spokesman Peskov has on Monday asserted that for the war to end, Ukraine must agree to all of Russia’s conditions.

Russian presidential press secretary Dmitry Peskov earlier said that Ukraine “must understand Russia’s conditions, agree to them, sit down at the negotiating table, and sign a document.”

And in televised statements Monday, President Vladimir Putin has congratulated Russian troops for “achieving victory” over the region:

In a meeting televised by Russian state media on Monday, defense minister Sergei Shoigu reported to Putin the Russian advances in the area.

…Putin told Shoigu that the military personnel who contributed to fighting in LPR, will be rewarded for their “bravery,” and that they should now “rest.”

“Other military units, including the East and West military groups, they have to fulfil their tasks, according to the previously suggested plan,” Putin said. “I hope everything will be successful as it happened in the [Luhansk] area,” he added.

RUSSIA: “With the fall of Lysychansk, all of Donbas (Donetsk & Luhansk) now under our control,” as Vladimir PUTIN signs a new decree for the continuation of the war. Zelensky: “We lost Lysychansk but will soon return there stronger.” So far, 60k Ukrainians dead; 50k wounded. pic.twitter.com/5S9227JYjh

It’s widely believed that Russia will next push to secure the whole of the Donbas, and from there continue an assault against the major northeast city of Kharkiv.

As for deteriorating relations with Bulgaria, this was perhaps inevitable after in April Russian energy giant Gazprom had completely cut off gas flows to both Bulgaria and Poland.