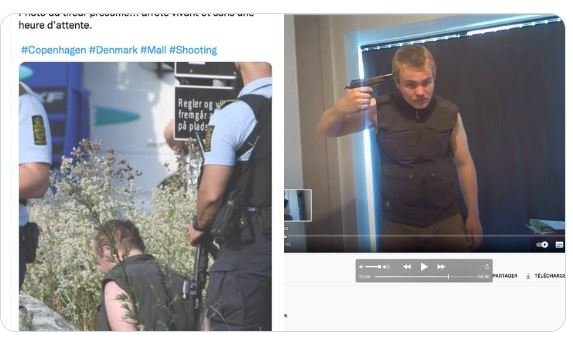 There was a mass shooting today at Field mall in the Danish capital of Copenhagen.

The killer was seen on video walking in the mall with a long gun on his shoulder. One day before the shooting, Noah Esbensen uploaded two videos on his YouTube channel.

He was wearing the same vest during the shooting that he wore in his videos.

He is another deranged young man who posted several suicide videos on his YouTube page.

The mainstream news media waited several hours before releasing his identity to the public.

In his videos, he is seen holding a gun to his head.

The Dane shooter had a YouTube channel, it’s just a series of videos called “I don’t care” where the dood pretends to shoot himself in the head. Bunch of heavy psych meds in the video as well. Won’t link it but you’ll find it searching for “Noah Esbensen.” pic.twitter.com/fUiiw7y15m

Yesterday, a 28-second video of Esbensen holding a gun to his head was uploaded to YouTube, in what is likely his apartment. May you burn in hell. #Copenhagen pic.twitter.com/meahWAu4pP

It’s clear that Noah is wearing the same vest in both of his videos and when he was arrested.