We Need To Declare Our Independence From The Federal Reserve

We Need To Declare Our Independence From The Federal Reserve

Authored by Joe Moffett via BitcoinMagazine.com,

The Democrat and Republican parties have been wielding social movements as weapons in a culture war. Is it time the Libertarian Party wields the Bitcoin hammer in the battle against the Federal Reserve?

“You will not find a solution to political problems in cryptography.” — Unknown cryptographer

“Yes, but we can win a major battle in the arms race and gain a new territory of freedom for several years.

“Governments are good at cutting off the heads of a centrally controlled networks like Napster, but pure P2P networks like Gnutella and Tor seem to be holding their own.” — Satoshi Nakamoto

Between Nakamoto’s emails, the Bitcoin white paper and the source code, there was probably nothing they said with a more aloof tone than this quote. I have to imagine they understood the economic ramifications that would come with developing such a system and this was likely why they remained anonymous. Then again, maybe they were blissfully unaware that there is no more dangerous enemy to the power of the state than economically free people.

Many early adopters of bitcoin were more likely software and tech gurus than they were economists or libertarians, but this comment by Nakamoto was profoundly libertarian. After all, if the government can wage war on poverty, drugs, crime and terror, why can’t libertarians and Bitcoiners alike wage war on money printing? It’s hard to overstate the phrasing here: “[W]e can win a major battle in the arms race and gain a new territory of freedom.”

The Libertarian Party, under new management, recognizes just how important Bitcoin is in this battle. Angela McArdle, chair of the Libertarian National Committee, embraces the importance of bitcoin’s scarcity, self-sovereignty, and censorship resistance. On a phone interview, McArdle shared:

“Inflation is being reported at 8.6%, but if you fill up the gas in your car, you know that it must be higher than that. No one knows the real rate of inflation, but what I do know is you cannot print more bitcoin. You can print dollars perpetually until it’s worthless like Venezuela, but you can’t print more bitcoin.”

Sure, the Libertarian Party is using the language, “Declare your independence from the Fed,” in a metaphorical way, but we can never forget that our country was founded on a very real Declaration of Independence that led to something very tangible.

Today more than ever, the enforcement tool of the so-called “omnipotent state” and those in power is their monetary policy. The monopolization of fiat currency and the burden of taxes have become weapons of the state to empower Washington and disenfranchise the people. Libertarians and Austrian economists have been sounding the alarms for decades, but as Ron Paul has attributed to George Orwell, “Truth is treason in the empire of lies.”

At a certain point however, the truth comes out.

Jerome Powell: “I think we now understand better how little we understand about inflation.”

Jerome : “This was unpredicted”

Only the “experts” and the media didn’t see this coming.
Just about everyone else did.

This inflation was either due to incompetence or deliberate debasing of the U.S. dollar, but Jerome Powell, chair of the Federal Reserve Board, admitted that he doesn’t understand basic economics. I would have preferred him to come out and admit he lied.

Our favorite Bitcoiner, Peter “Gold” Schiff, along with every Austrian economist, pointed out how inflation works when the money printer started in March 2020 (when Schiff comes to the same realization as Bitcoiners, we will welcome him with open arms),

As the Fed will create all this money out of thin air the people will pay the cost through inflation. Consumer prices are about to soar, wiping out the savings of millions of Americans, and destroying the purchasing power of wages for millions more.

So here we are, July Fourth is coming up and we, the people, are in a quandary. Our leaders lie, our media covers for them, our financial institutions are corrupt and consent of the governed sounds more like a brand slogan than the foundation of our government.

So what options do we have?

Fix the money, fix the world.

Bitcoin is the greatest peaceful revolution the world may ever know. Back to that seemingly innocuous Nakamoto quote, “[W]e can win a major battle in the arms race and gain a new territory of freedom for several years.” The arms race they must be referring to is power — political and economic — of governments versus economic power in the hands of individuals. Maybe it’s time to turn Rosie the Riveter into Dolores the Diamond Hands. 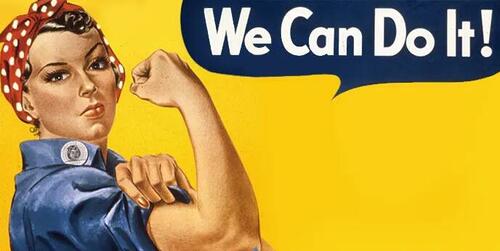 Libertarians and Bitcoiners are allies in the fight for sound monetary policy. Speaking of a Bitcoiner and Libertarian alliance, McArdle said, “It’s important for us to build a parallel economy, so in the event the dollar collapses completely, or some kind of financial crash, we have something to shift over to laterally. The more people that have Bitcoin and understand it, the better.”

Nakamoto had this revelation when they said, “It’s very attractive to the libertarian viewpoint if we can explain it properly. I’m better with code than with words though.” Clearly, they weren’t wrong. Nakamoto’s creation spawned a movement without a speech or catchy slogan, just code and believers. Some of us libertarians may have been a bit late to bitcoin, myself included, but the troops are coming.

“Once more unto the breach, dear friends, once more” — King Henry in “Henry V” by William Shakespeare

The Libertarian Party is hosting a livestream event at 2:00PM EST on July 3, 2022. Join the call and declare your independence from the Fed. 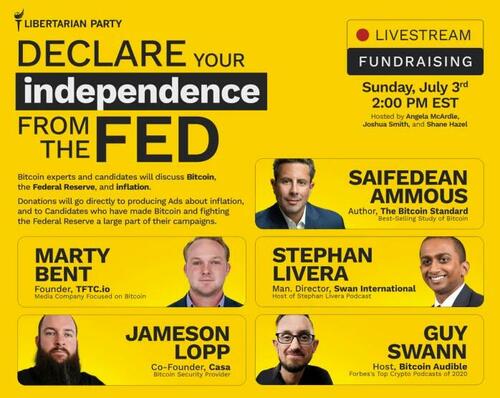 Declare your independence from the Fed

Think about doing three things in preparation for Independence Day:

I want you… to buy bitcoin. 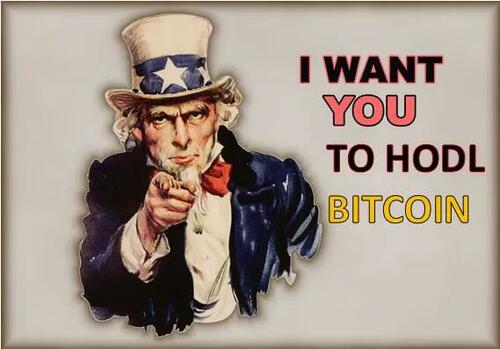