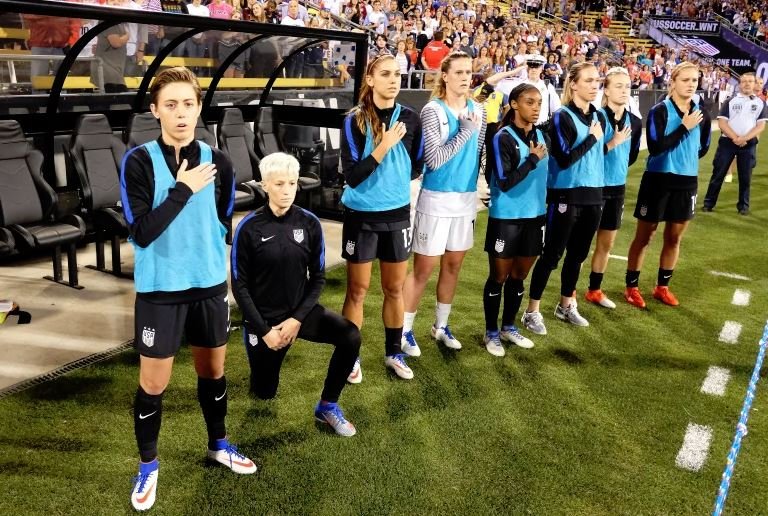 Rapinoe kneeling to American Anthem during a soccer match

Outspoken Trump-hater and America-basher Megan Rapinoe will receive the Presidential Medal of Freedom from Joe Biden.

And here we thought her 15 minutes of fame had already passed.

News broke Friday that Megan Rapinoe will be one of 17 recipients of the Presidential Medal of Freedom this year, along with US gymnast Simone Biles.

The Medal of Freedom is the highest civilian honor awarded in the US, usually given to those who have made “exemplary contributions to the prosperity, values, or security of the United States, world peace, or other significant societal, public or private endeavors.”

Rapinoe receives the honor just a few days after declaring that overturning Roe v. Wade was a “violent onslaught on women’s bodies,” while being completely unable to declare what a woman actually is:

Rapinoe became the darling of the fake news media and Democrats after she continued to attack President Trump and her country.

Here are a few reminders of this woman’s lack of character.

Refusing to sing the National Anthem.

Taking the knee to the National Anthem on foreign soil.

VIDEO: US Women’s Soccer Team Took Knee During Anthem Before Getting Spanked by Swedish Team 3-0 in Olympic Opening

‘Hide Your Kids! Hide Your Wives!…We Got the Key to the MotherF***ing City!’ Trashy US Women’s World Cup Soccer Champs Utter Profanities All During NYC Parade

And Joe Biden is honoring this loathsome character with a prestigious award.

The post Vocal Trump-Hater and America-Basher Megan Rapinoe to Receive the Presidential Medal of Freedom from Joe Biden appeared first on The Gateway Pundit.