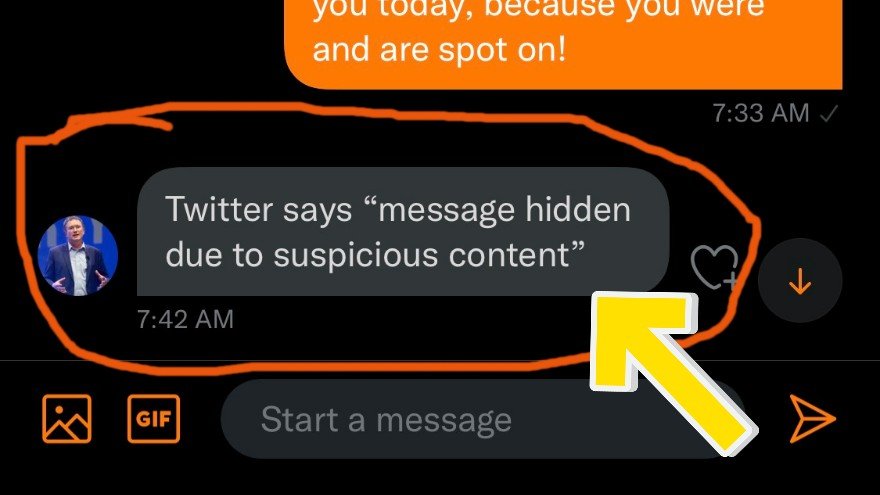 On Sunday, The Gateway Pundit published an article outlining the Twitter posts of Jeff Bezos and Joe Biden, in which it included quotes from leaders like Congressman Thomas Massie, and the article was censored as containing “suspicious content.”

After publishing the article, this writer sent the link through a private message to Massie for review since he was quoted in the piece.

In a short time, the Congressman replied that he could not see the article because Twitter had replaced the link with a notice. The notice read: “Message hidden due to suspicious content.” In order for Massie to view the article, it required that a post was shared elsewhere and a link to the post, not the article, be sent back. Only through this workaround was the content available to view.

Twitter has been censoring, shadow-banning, and eliminating Gateway Pundit articles for years now.

In February 2021 Twitter deleted the Gateway Pundit Twitter account after we published footage of a van dropping a load of questionable ballots at Detroit’s TCF Center at 3:30 AM following on election night after all of the ballots were counted.

This has proven to be an ongoing issue related to Twitter and other social media sites.  It has been a centerpiece of the motivation that has spurred Elon Musk to pursue a purchase of the social media platform. He has often spoken about the need to expand free speech, especially on platforms like Twitter.

In March, Musk posted a poll on Twitter with the caption, “Free speech is essential to a functioning democracy. Do you believe Twitter rigorously adheres to this principle?”

Free speech is essential to a functioning democracy.

Do you believe Twitter rigorously adheres to this principle?

More than two million responded, with more than 70% of respondents saying they do not believe that Twitter adheres to the principles of free speech.

In March, Twitter came under fire for censoring a conservative account for misgendering. Twitter locked the account of a parody site, The Babylon Bee, after it awarded Rachel Levine, the transgender Biden administration official, the title of “man of the year.”

The Babylon Bee story was a reaction to USA Today’s naming of Levine, who is US assistant secretary for health for the US Department of Health and Human Services, as one of its “women of the year.”

Twitter said it would restore the account, which has more than 1.3 million followers if the Bee deletes the tweet, but CEO Seth Dillon says he has no intention of doing so.

According to a 2020 study from Pew Research Center, “Americans by and large believe social media companies are censoring political viewpoints they find objectionable. Roughly three-quarters of Americans (73%) think it is very or somewhat likely that social media sites intentionally censor political viewpoints they find objectionable, including 37% who say this is very likely.”

Once again, left-leaning social media chooses to censor views that do not align with the liberal agenda, despite the content being entirely factual.

For the record — The Missouri and Louisiana Attorneys General are using Gateway Pundit evidence in their lawsuit against the Biden regime and the Tech Giants.

The post Twitter Censors Gateway Pundit Article on Jeff Bezos’ Condemnation of Biden and His Understanding of Basic Economics appeared first on The Gateway Pundit.