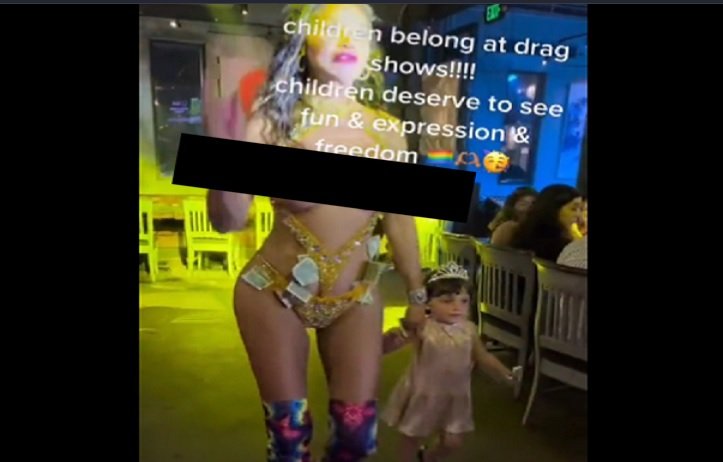 A viral video shows a drag queen parading a young child around a runway while flaunting his giant fake breasts.

Wearing pasties on his nipples and dollar bill inserted in his thong, the drag queen is seen in the 16-second clip holding the toddler’s hand while strutting across the floor.

Those at @rhousewynwood responsible for this belong in jail https://t.co/ozEj2S4Hfa

The video was posted on Tik Tok and recorded at R House Wynwood, a Miami restaurant that regularly hosts drag queen shows.

So we know the venue where this happened…

Is anyone going to do anything about it???https://t.co/oDV535MjeH

The lewd Florida drag show comes as Gov. Ron DeSantis vows to crackdown on progressive over issues surrounding “gender identity.” The Florida Governor has threatened to deploy child protective services on parents who take their children to drag queen shows.

“We have child protective statutes on the books,” the governor said in June. “We have laws against child endangerment.”

“It used to be kids would be off-limits. Used to be everybody agreed with that,” DeSantis continued. “Now it just seems like there’s a concerted effort to be exposing kids more and more to things that are not age appropriate.”

I’m introducing a bill to make it illegal for children to be exposed to Drag Queen performances.

Meanwhile, Democrats and LGBQ activists are doubling down on their attempt to normalize child sexual grooming as children in attendance of drag queen shows becomes a regular occurrence.

On June 4, a Dallas nightclub hosted an event called “Drag The Kids To Pride.” Images from the event show young children sitting before a drag queen with a sign in the background that reads, “it’s not gonna lick itself!”

On June 10, a California middle school commemorated Pride Month by subjecting young students to a drag queen show. Following the lewd exhibition for children, a drag queen that performed at the event bragged on social media that he  “had them kids loosing it.”

On June 26, a drag queen wear a thing twerked for children at a ‘family friendly’ pride event in Soldotna Creek, Alaska.