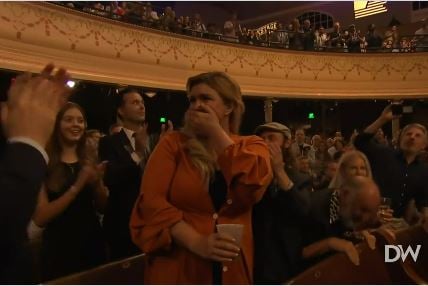 Cancel culture is beginning to lose its edge. Gina Carano has certainly proved as much.

Despite Disney and Lucasfilm’s best efforts, Carano, former MMA star turned actress, managed to find a way to stay in the spotlight.

On Wednesday, a largely conservative audience reminded her that she is far from forgotten by giving her a powerful standing ovation.

Reaching this moment had certainly been a long journey for Carano.

After Disney’s Lucasfilm fired Carano for essentially saying that people should be kind to one another, Carano quickly found another film project to work on in the form of the Daily Wire’s “Terror on the Prairie.”

In its effort to build an alternative to Hollywood, the Daily Wire has launched a full-fledged streaming platform full of documentaries, television series and movies, including Carano’s “Terror on the Prairie,” a western thriller.

On Wednesday, Carano was in attendance at the Daily Wire’s “Backstage Live” event at the historic Ryman Auditorium in Nashville, Tennessee, as the company announced the platform’s latest offerings.

Once it was revealed that Carano was in attendance, the largely conservative audience showed their appreciation with a massive standing ovation.

As the audience continued to cheer loudly, tears can be seen flowing down Carano’s face.

Clearly overcome with emotion, she continued to break down to the point of covering her face.

On Thursday, the actress posted a picture of the event on Instagram.

“I was not expecting that. Oh man my heart is so full. The love is deeply felt. I can’t even describe my gratitude or why I even deserved being on the end of this love.. but I appreciate you all so much,” Carano wrote in the post.

“Thank you thank you.. for letting me be human, bear my flaws and stumble across finding my voice.. I only do it to let people know that they are not alone during this madness.

“It’s not a perfect voice, it stutters and flubs it’s way to a complete sentence but it’s from my heart and I know you all feel it. Thank you for seeing me. I see you too.”

Carano’s case proves that cancel culture is coming to an end.

They can’t cancel us if we won’t let them.

The Daily Wire — a conservative media company — proved this point by hiring Carano to make a film.

Audiences have also responded by lending her their support.

As long as we stick together, there’s nothing Hollywood, the establishment media or the left can do to stop us.