It’s All Going Woke As The National Archives Says The U.S. Constitution Has ‘Harmful Language’ 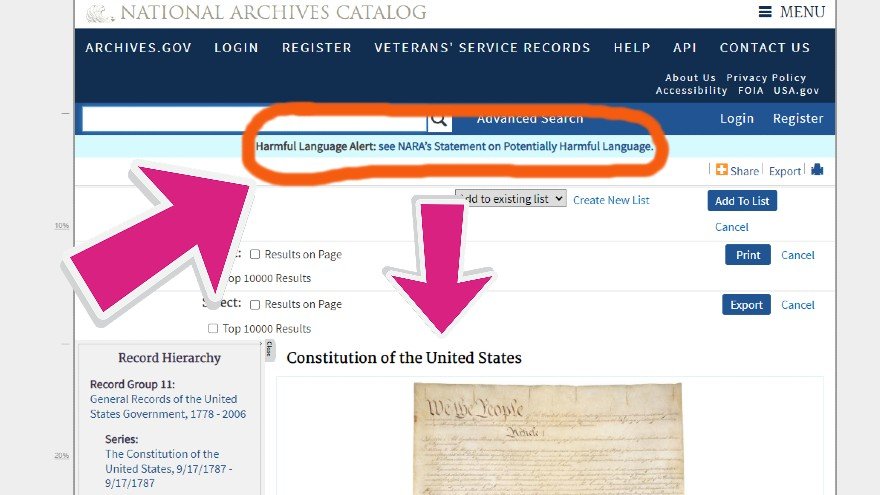 As you celebrate Independence Day this year with family and friends the left is up to their old tricks.

The National Archives now has a warning label on the US Constitution.

The webpage of the U.S. National Archives that hosts the nation’s founding Constitution has a “harmful language alert” for readers at the top of the page.

The warning now occurs on many pages on the archives.org website and links to a page entitled “NARA’s Statement on Potentially Harmful Content.”

As you celebrate the fourth, keep in mind that there is a HARMFUL LANGUAGE WARNING on the US Constitution.

The Archives’ defines harmful language in numerous variations. However, it appears to have a liberal, more left-leaning bias in determining what it deems as harmful or offensive.

It considers any language reflecting racist, sexist, ableist, misogynistic/misogynoir, and xenophobic opinions and attitudes as harmful. Albeit, the definition behind some of the terms is subjective to the reader, and many have no specific definition in societal norms.

It also notes that discriminatory language towards or excluding diverse views on sexuality, gender, and religion is offensive. Again, this is subjective, and a person’s views of sexuality or religion can be acceptable or offensive based on one’s biases.

It also classifies language as offensive when demonstrating bias and exclusion in institutional collecting and digitization policies.

According to the site, Archivists choose what language to use when describing materials. It notes that some of the documents in the archive contain descriptions written many years ago, using language accepted at the time.

When you click the warning links, the disclaimer reads, “The Catalog and web pages contain some content that may be harmful or difficult to view. NARA’s records span the history of the United States, and it is our charge to preserve and make available these historical records. As a result, some of the materials presented here may reflect outdated, biased, offensive, and possibly violent views and opinions. In addition, some of the materials may relate to violent or graphic events and are preserved for their historical significance.”

The archive warning also notes that it is working to “update descriptions that are harmful and to establish standards and policies to prevent future harmful language.”

In contrast, the warning does not appear on a page detailing the racial discrimination laws known as Jim Crow, which has no fewer than six uses of the word “n*gg*r.”

The warning is also missing from a page with the word “k*ke.” The page details the events surrounding the assassination of President John F. Kennedy.

Yet, the National Archive has placed the warning on the page of the U.S. Constitution. It is another indicator of the agenda of the socialist mindset that is guiding the current administration.

The post It’s All Going Woke As The National Archives Says The U.S. Constitution Has ‘Harmful Language’ appeared first on The Gateway Pundit.