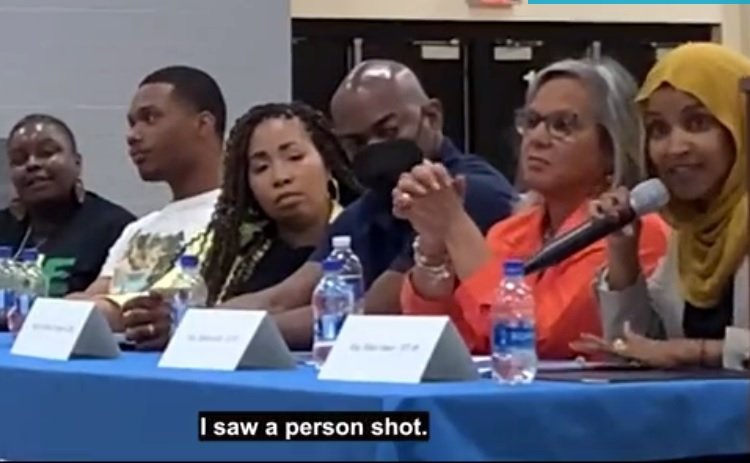 Ilhan Omar says Minnesota is more violent than the Somali refugee camp she fled to as a teen.  She conveniently omits again that her father was a top guy in the brutal regime replaced in Somalia.

Ilhan Omar shared some of her past this past weekend while again degrading America.

Democratic Rep. Ilhan Omar said that her arrival in Minnesota exposed her to more gun violence than living in an east African refugee camp did.

Speaking at the Gun Violence Community Conversation at North High in Minneapolis on Thursday, Omar said: ‘For six years, I had the privilege of not seeing any violence, until I moved to Minnesota.’

Omar continued: ‘My first year in Minnesota I both saw a person shot at Peavey Park, dead on the floor, three weeks after my father and I arrived in Minneapolis. Six months later I watched the Minneapolis police put 38 bullets into the body of a mentally disabled Somali immigrant who didn’t speak English.’

There is much that Ilhan Omar conveniently omits.  For one, her family changed their name after they escaped Somalia and while in Kenya.  The reason for this is because Omar’s father was one of the leaders of the genocidal Barre regime in Somalia.

Here is what we shared about Omar’s family and their crimes:

In 1995, Ilhan entered the United States as a fraudulent member of the “Omar” family.

That is not her family. The Omar family is a second, unrelated family which was being granted asylum by the United States. The Omars allowed Ilhan, her genetic sister Sahra, and her genetic father Nur Said to use false names to apply for asylum as members of the Omar family.

This ties in to our previous report by Joe Hoft on Ilhan Omar’s father.

The Gateway Pundit obtained information that is damning for Minnesota Congresswoman Ilhan Omar.

Omar’s father, Nur Omar Mohamed (aka Nur Said Elmi Mohamed), is connected to the former dictator in Somalia, Said Barre.  Nur and other former Barre accomplices are living in the US illegally.

Omar’s father Mohamed, is living in the US.  He and other Somalians like Yusuf Abdi Ali, who killed thousands for Barre, escaped to the West and were not vetted properly before entering the country.  Barre was a dictator and was connected to Cuban dictator Fidel Castro as well as other dictators around the globe.

Ali is a convicted war criminal who did the killing himself.  Ali has been located in the US working as security at Dulles International Airport and driving for Uber in 2019.  He reportedly lived at one time in Alexandria, Virginia.  Ali was a Colonel in the Somalian Army’s 5th Mechanized Brigade in 1987 and was a graduate of the Pentagon’s Program for Foreign Officers in 1986.  He’s also a war criminal in response to his actions in Somalia.

Nur, Representative Omar’s father, appears to have been a party propagandist under the dictator and was responsible for ‘ideological’ aspects of the Red-Green revolution.  (He worked for the Marxist/Stalinist regime under dictator Baare as a teacher of teachers.) This could have included providing the ideological/political justification for the massacres of the late eighties.

It is not a secret that Ilhan Omar’s father illegally entered the United States.

The Nur family was well connected in the country led by the Marxist regime.  Young Omar went to kindergarten at age four, their family lived in a secure compound in Mogadishu.  When the regime was overtaken, the family caught a plane to escape the country.  The average GDP per capita in Somalia was only $187 dollars in 2010 twenty years after they fled the country when the regime fell. Obviously, Nur’s family was a privileged family.

According to a 2016 article on Omar, when the Marxist regime was being overtaken the secure compound that the family lived in was under attack by 20 armed men, somehow the family escaped.  It is not clear how.  Either the family had superior armed guards within their compound or they bribed the attackers and sent them on their way (or the story is a complete fabrication).

Both Ali and Nur escaped Somalia after the fall of Barre.  Because they were no longer safe there and would have been put on trial and shot if caught, they exited the country. Both ended up in the US and both hid the fact that they worked for a totalitarian regime. Both lied on their Form N-400, Application for Naturalization about their communist background.  (They had to or they wouldn’t be here.)

As you can see below:

The Immigration and Nationality Act (I.N.A.) contains a prohibition on naturalization for anyone involved, within the last ten years, with a group that advocates or teaches opposition to all organized government; or involved with the Communist Party or any other totalitarian party of the U.S. or any foreign state; or who advocates world communism or totalitarian dictatorship even without formal group membership. (See I.N.A. Section 313).”

Both Nur and Yusuf should be disqualified from permanent US residency and a revocation of their US citizenship should take place.

Representative Omar reportedly lied after she married her brother in order to assist him in obtaining US citizenship.

This would obviously disqualify Omar and her brother from legal citizenship.

This was from our prior posts on the Minnesota Representative’s family:

Reminder: Ilhan Omar’s Father was Top Propaganda Official in Genocidal Barre Regime – Then He Changed His and Her Name and Entered US Illegally

Someone should have asked how much violence Omar remembers at the hands of her father in Somalia!  Ilhan Omar should not be a Democrat Rep. in Congress, she should be deported or in jail for immigration crimes.