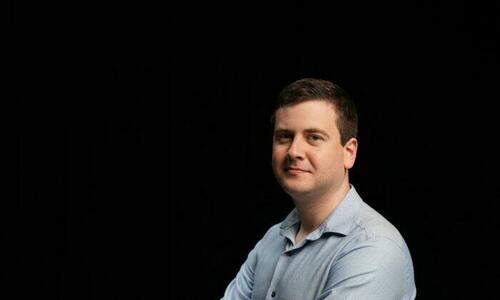 Authored by Masooma Haq and Roman Balmakov via The Epoch Times (emphasis ours),

Matt Palumbo, author of “The Man Behind the Curtain: Inside the Secret Network of George Soros,” details billionaire George Soros’s connection to American politics, and illustrates how Soros controls not only what is written about him, but also influences how the American public perceives news events.

Soros created a financial concept called reflexivity, which Palumbo said is “brilliant,” because it can cause what Soros wants in the finance sector to happen.

“But expectations set reality and Soros realized, ‘Well, that’s true of media as well.’ If you tell people what to expect, they’re going to reinterpret reality,” and that can be used to affect how people interpret news events, Palumbo said during a recent interview for EpochTV’s “Facts Matter” program.

“For whatever reason, if people think something’s going to happen, it actually will happen,” and Soros applied this to media companies’ coverage to make people believe something that did not actually happen, happened, said Palumbo.

Soros-backed media agencies use this concept to create false narratives and make people believe in something that did not actually occur. The reason Soros is able to have this level of influence is that he gives tens of millions of dollars to the U.S. media infrastructure.

There are many Soros-linked mainstream media organizations including, “ABC, CBS, CNN, Washington Post, New York Times, I mean, it is a very long list. Type Soros’s name and just look at how they cover him, and if it’s ever anything negative, it’s ‘anti-Semites say: negative claim,’” said Palumbo, adding that their coverage always seems to favor Democrats and Soros.

A watchdog group called the Media Research Center (MRC) has documented Soros’s ties to media infrastructure. “Soros has spent more than $52 million funding media properties, including the infrastructure of news—journalism schools, investigative journalism, and even industry organizations,” according to an MRC report.

Many left-wing groups, including media companies, get funding via Soros’s Open Society Foundation. That group is known to fund progressive initiatives like Black Lives Matter and Defund the Police, as well as political candidates and district attorney campaigns, said Palumbo.

Soros’s foundation claims to promote democracy and individualism, but in reality, it supports a more radical agenda, said Palumbo.

“There is what they say things are and what they really are,” Palumbo said about the Open Society Foundation

In his research, Palumbo also found that many people who once worked for Soros’s Open Society Foundation later went on to work for media outlets.

In addition, Soros has funded campaigns for many Democratic politicians and progressive district attorneys, backing those who will get the results Soros wants.

“If you elect a DA, they have total autonomy on all those things, so it’s just hey, I want the law changed, I back a guy who wants to change it exactly the way I do, he goes in and changes it overnight,” said Palumbo.