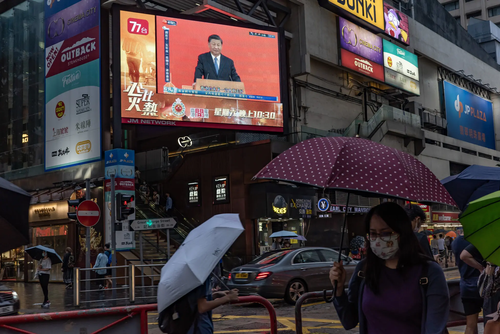 President Xi Jinping on Friday wrapped up a two-day visit to to Hong Kong which marked the city’s 25th anniversary of its turn to Chinese rule by giving a speech seen as a “vigorous endorsement” of the ‘one country, two systems’ constitutional principle.

He also took the opportunity to praise outgoing leader Carrie Lam for her efforts to “stop violence and chaos, fight the pandemic with full force, integrate with the country’s development plan and safeguard national sovereignty, security, development interests and Hong Kong stability.”

China’s President Xi Jinping said that Hong Kong has overcome its challenges and ‘risen from the ashes,’ as he visited the former British colony to celebrate 25 years since its return to Chinese rule https://t.co/NhKKvp69r5 pic.twitter.com/9BjNiq6q3f

In reality this included a severe cracking down on what were on occasion violent or destructive pro-independence protests, but more importantly the unprecedented imposition of the national security law which essentially criminalized the opposition protest movement, and imposed sweeping censorship on film, media, and school curriculum.

Xi stepped out to a red carpet and was greeted in a massive security presence environment by a very regulated, restricted group of people waiving at him upon arriving on a high-speed rail train this week, which marked his first visit to the island in two-and-a-half years.

On Thursday, in a brief arrival speech, the president described Hong Kong as having “risen from the ashes” after overcoming various severe challenges since his last visit in 2017, which proved that “one country, two systems is a good system”.

Significantly, the short trip also marked the first time Xi has traveled outside the mainland since the start of the Covid-19 pandemic.

During this speech at the Hong Kong West Kowloon train station, Xi said, “As long as we stick to the ‘one country, two systems’ framework, Hong Kong will certainly have a brighter future and will make new and bigger contributions to the great rejuvenation of the Chinese people.”

🇨🇳 CCTV’s Livestream unwittingly showed us what we were not supposed to see.

Xi Jinping’s highly anticipated speech in #HongKong was delivered to a massive crowd of… FOUR people.

This is how the Leader of a “Great Nation” is addressing ‘HongKongers’, inside of a train station: pic.twitter.com/4Cvey2Pgmf

In a veiled reference to the couple years of protest crisis the semi-autonomous city went through which morphed into persistent independence unrest, Xi said, “After much turmoil, people have learned a painful lesson that Hong Kong cannot be disorderly, it cannot afford to be.” Xi further stressed that the territory is now “in a new phase from disorder to stability, from stability to prosperity.”

It should be recalled that several independent newspapers and media outlets have recently been shut down by HK police, with at least 150 pro-independence activists having been arrested, and many of the more prominent activists on the run or in self-exile.

Taking note of this dimmer fate of the city, emeritus professor of politics at the University of Hong Kong John Burns was quoted in The New York Times as saying, “Of course, this is about celebrating the 25th anniversary and all of that, but he is also declaring victory over the pan-democratic opposition and their supporters.”

Meanwhile, a new HK chief executive, John Lee, was sworn-in on Friday, and is already pledging personal loyalty to Xi and the mainland…