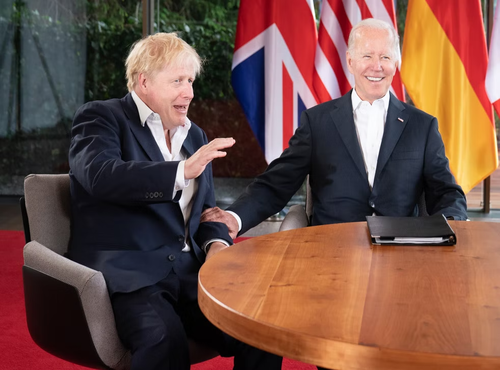 During his Thursday news conference at the Madrid NATO summit, President Biden announced yet more Ukraine security aid – this time to the tune of $800 million in the next round of security assistance. But what stood out compared to prior announcements of aid is that this includes some “offensive” weapons, in addition to air defense systems, which is a significant upgrade in terms of heavier and more sophisticated hardware compared to things like Javelin anti-tank missiles given early in the conflict (and prior to it).

Biden stressed in his remarks at the end of the two-day NATO summit, “Putin thought he could break the transatlantic alliance. He tried to weaken us. He expected our resolve to fracture. But he’s getting exactly what he did not want.”

According to The Hill some of the weapons he listed off were identified as “more counter-battery radars, artillery and ammunition, including ammunition for High Mobility Artillery Rocket Systems (HIMARS) that the U.S. has recently supplied to the Ukrainians. Biden also predicted that other countries would send HIMARS to Ukraine.”

Up to this point, the US administration has carefully focused its rhetoric on declaring that only “defense” weapons are being supplied, thus it’s hugely significant that Biden has begun admitting “offensive” weapons are included as well, perhaps as part of messaging aimed at Putin saying Washington is ready to stay the course in backing Ukraine even as it’s clear Ukrainian forces are being beaten back in the Donbas. Biden said:

They need — we’re going to be providing another — well, I guess I’ll announce it shortly, but another $800 billion — $800 million in aid for additional weaponry, including — you know, weapons, including air defense system, as well as offensive weapons.  I have a whole list I’d be happy to give to you.  But that’s the next tranche that’s going to occur.

National security adviser Jake Sullivan earlier this week mentioned medium and long-rage anti-air systems, but didn’t specify just which ones would be transferred to the Ukrainians. Previously the White House expressed a desire to avoid sending weapons with ranges capable of striking inside Russia, but it’s no longer clear if this remains a guiding policy at this point.

The day prior, on Wednesday, the UK too announced it will be providing Kiev with another one billion pounds in military aid. This has been described as to include “air defense systems, uncrewed aerial vehicles, new electronic warfare equipment and thousands of pieces of equipment for Ukrainian soldiers.”

Prime Minister Boris Johnson, who has been outspoken in encouraging Ukraine’s president Zelensky to at no time offer any territorial concessions for the sake of peace, said in unveiling the new aid, “UK weapons, equipment and training are transforming Ukraine’s defenses against this onslaught. And we will continue to stand squarely behind the Ukrainian people to ensure Putin fails in Ukraine.”

Previously, Ukrainian military commanders have suggested the additional weapons are “too little, too late” in making a decisive difference in the tide of war for the Donbas, but they appear to be setting in for the reality of a long haul, grinding fight for the country.