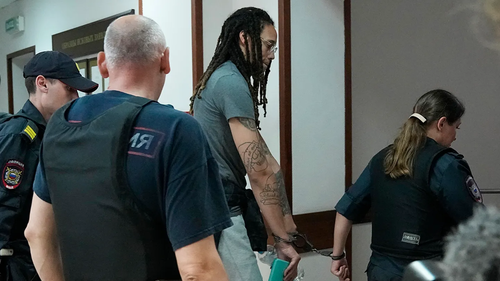 Two-time US Olympic basketball gold medalist and WNBA star Brittney Griner appeared in a Moscow court Friday, which marks the start of her much anticipated state trail on “drug smuggling” charges, after she was caught allegedly with cannabis oil for a vape pen in her luggage on Feb.17 at a Moscow airport.

She faces up to ten years in prison, but the US State Department has classified her as “unlawfully detained” by Russia, which authorizes the Biden administration to initiate negotiations for the return of a ‘hostage’ illegally held.

The Russian prosecutor at the opening of the Friday trial accused Griner of smuggling merely less than a gram of cannabis oil in what to most Western onlookers has appeared a politically motivated trial.

“Being sufficiently aware that the movement of narcotic drugs is not allowed… no later than February 17, 2022 at an unspecified location under unspecified circumstances from an unidentified person [Griner] bought two cartridges for personal use, which contained 0.252 grams and 0.45 grams of hash oil, totaling 0.702 grams,” the prosecutor said in the Khimki City Court., according to a TASS correspondent quoted in CNN.

Griner has already been locked up for over four months at this point, with the trial now looking to go at a slow pace, as the next second hearing of the trial is scheduled for July 7. Speculation over her fate and US communications to get her back intensified after the Feb.24 Russian invasion of Ukraine.

One Congressional leader late this week ripped what he called a “sham trial” of what’s in reality Russia brazenly taking a “political prisoner”:

Rep. Colin Allred, D-Texas, issued a statement the following day condemning her “wrongful” detention and accusing Russian officials of creating the image of a fair trial.

“Brittney Griner has been wrongfully detained for four months, and Russia is now engaging in theater by subjecting her to a sham trial in an effort to create a false pretense that she is anything other than a political prisoner,” Allred said in a press release.

Meanwhile, Russia is again hinting that could be ready to negotiate a hostage swap for a notorious arms trafficker named Viktor Bout.

The Kremlin appears interested in linking the fates of Brittney Griner, the WNBA star detained in Russia on drug charges, and Viktor Bout, a Russian arms dealer imprisoned in the U.S., in a potential deal with the Biden administration that would free both. https://t.co/d0NNngHVDc

But who is Viktor Bout? Yahoo News describes the high-profile case which saw US agents travel across the globe to nab him over a decade ago as follows:

Bout, whose exploits earned him the nickname the “Merchant of Death,” flooded fierce conflicts in Africa and the Middle East with weapons, U.S. authorities say. He was arrested during a sting operation in Thailand in 2008, extradited to the U.S. and sentenced to 25 years for conspiracy to kill U.S. citizens, delivery of anti-aircraft missiles and providing aid to a terrorist organization.

A prior US statement issued after Washington deemed her status as “wrongfully detained” abroad said the following:”The welfare and safety of U.S. citizens abroad is among the highest priorities of the U.S government.” It added: “The Department of State has determined that the Russian Federation has wrongfully detained US citizen Brittney Griner,” while explaining, “With this determination, the Special Presidential Envoy for Hostage Affairs Roger Carstens will lead the interagency team for securing Brittney Griner’s release.”