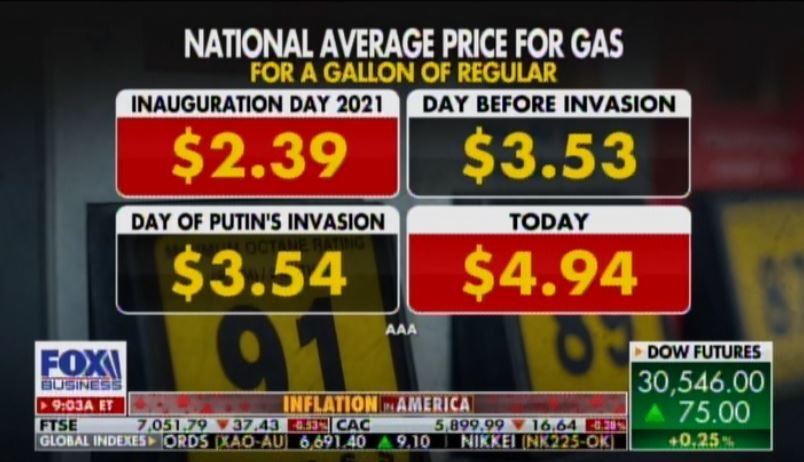 The current price for a gallon of regular gas in the United States hit $4.84 on Friday before the 4th of July Weekend.

This is more than twice the cost from two years ago.

Gas prices under Joe Biden have exploded!  The cost is destroying the Middle Class and it does not look like the price will be easing anytime soon.

In response to these record prices, Joe Biden’s Director of the National Economic Council on Thursday told CNN,  “This is about the future of the Liberal World Order and we have to stand firm.”

CNN asks WH’s Brian Deese what he’d tell Americans who can’t afford to pay high gas prices for months/years if military analysts project the Russia-Ukraine war to go so long
Notes progress but also: “this is about the future of the liberal world order and we have to stand firm” pic.twitter.com/vlY2I5v2Xs

Cristina Laila reported on this earlier.

And we know the high gas prices are on purpose.

Joe Biden admitted that the current record gas crisis in America is ALL ON PURPOSE during a speech to reporters in Japan in May. That was back when gas was “only at” a record $4.60 per gallon.

Joe Biden told reporters, “When it comes to the gas prices, we’re going through an INCREDIBLE transition… And, God willing, when it’s over we’ll be less reliant on fossil fuels.”

Then in early June, Joe Biden said it again.

Joe Biden told reporters, “My mother had an expression: out of everything lousy, something good will happen. We have a chance to make a fundamental turn toward renewable energy, electric vehicles, and across the board.”

Biden: “My mother had an expression: out of everything lousy, something good will happen. We have a chance to make a fundamental turn toward renewable energy, electric vehicles, and across the board.” pic.twitter.com/Si4oJ7ROFg

And earlier this week Biden’s climate advisor Gina McCarthy cheered the news that fossil fuel workers are losing their jobs.
These demons!

Gina McCarthy: “We have opportunities now to transfer to clean energy in a way that grows thousands of jobs. We just had a recent report that is showing that all of the energy and the employment stats from last year. Clean energy is winning. Fossil fuels losing jobs.”

Gina McCarthy won’t tell you that wind power provides only 9% of our electricity needs.

Democrats won’t tell you this. They would rather have blackouts than use fossil fuels to cool your home. This weekend as you fill your tank over the holiday weekend remember that the price you are paying today is on purpose.

The Biden regime is crushing the middle class — And that was the plan all along.

The post This Is Your Future Under the “Liberal World Order” — Gas and Food Prices Soar Under Joe Biden and The Regime Admits It’s on Purpose appeared first on The Gateway Pundit.