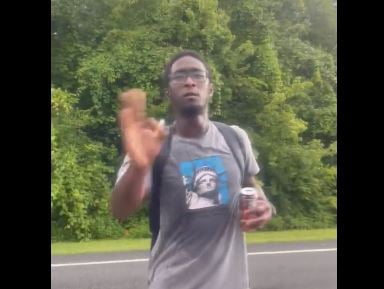 On Thursday, 27-year-old Samuel Benjamin was arrested in Florida after assaulting a campaign volunteer for Republican congressional candidate Cory Mills.

Samuel Benjamin became violent after he was confronted on why he was tearing up GOP political signs.

Benjamin started cursing at the driver. Then Benjamin threw his drink at the campaign volunteer’s car. And Benjamin then reached his hands inside the car and assaulted the driver.

The entire assault was caught on video.

WARNING on violence and language.

On Thursday, June 30th in Sanford, Florida, 27-year-old Samuel Benjamin was arrested for assault by Sanford Police for allegedly striking another man who was volunteering for a local Republican congressional campaign.

The victim, who asked that we conceal his identity and claims to be a campaign volunteer for Republican congressional candidate Cory Mills, sent The Floridian a video of the incident that he recorded on his mobile phone.

In the video, the alleged victim is seen pulling up to Benjamin, who was standing in the center median of the street. The victim is heard asking his alleged assailant,” Is there a reason why you are tearing that sign down?”

Benjamin responded to the alleged victim with an expletive-filled and racially-charged verbal assault just as he appeared to punch the victim through his open car window.

Benjamin was later arrested for assault.