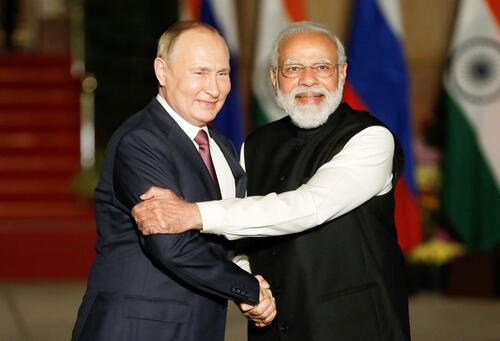 Indian Prime Minister Narendra Modi and Russian President Vladimir Putin held an important phone call Friday wherein Modi underscored that India favors dialogue and diplomacy toward reaching a peaceful Ukraine solution. “In the context of the ongoing situation in Ukraine, Prime Minister reiterated India’s long-standing position in favor of dialogue and diplomacy,” a readout from his office said. But unlike interaction with Western leaders, including France’s Macron, it appears Modi kept things relatively “light” when it came to rhetoric on Ukraine.

Also high on the agenda was the very uncertain and calamitous state of global energy and food markets. Modi had days prior addressed G7 leaders, saying, “Even in the present situation, we have constantly urged for the path of dialogue and diplomacy. The impact of this geopolitical tension is not just limited to Europe. The rising prices of energy and food grains are affecting all the countries.”

But things aren’t so dire for either Russia or India when it comes to energy, as both appear to be positively benefitting from the West’s attempt to halt Russian energy flows to Europe, even as G7 countries mull imposing a price cap on Russian oil.

This as Russia is quickly muscling into India’s oil market, with Modi’s India only too happy to gorge on cheap Russian barrels, as Bloomberg underscored days ago, suggesting that Russia could now be positioned as India’s biggest single supplier: “Deprived of many of its traditional European buyers, Moscow is on course to deliver somewhere between 1 million and 1.2 million barrels a day to the world’s third-largest oil importer this month, according to tanker tracking figures compiled by Bloomberg and two oil analytics firms,” according to the report.

This is even significantly far beyond supplies coming from Saudi Arabia, though India relies more heavily on Iraq crude flows.

Russia’s invasion of Ukraine triggered global condemnation and tough sanctions aimed at denting Moscow’s war chest. Yet Russia’s revenues from fossil fuels, by far its biggest export, soared to records in the first 100 days of its war on Ukraine, driven by a windfall from oil sales amid surging prices, a new analysis shows.

Russia earned what is very likely a record 93 billion euros in revenue from exports of oil, gas and coal in the first 100 days of the country’s invasion of Ukraine, according to data analyzed by the Center for Research on Energy and Clean Air, a research organization based in Helsinki, Finland. About two-thirds of those earnings, the equivalent of about $97 billion, came from oil, and most of the remainder from natural gas.

“The current rate of revenue is unprecedented, because prices are unprecedented, and export volumes are close to their highest levels on record,” said Lauri Myllyvirta, an analyst who led the center’s research.

But India, and also China, have been enjoying a steep discount of around $30 less per barrel compared to Brent during that time period the Times documented. 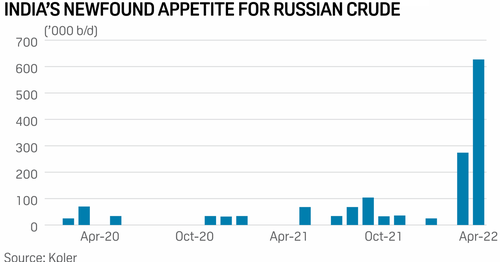 As S&P Global reviewed of those opening three months of the Ukraine war, “The price of Russian Urals CIF Rotterdam averaged $69.89/b in April, according to Platts data. This compares with a monthly average of $104.40/b for United Kingdom’s Forties, which is similar in quality to Urals.”

Russia’s readout of the Modi call focused on messaging that Moscow fundamentally lays blame on the West for the emerging global food crisis in the wake of Ukraine grain shipments not being available for export.

“Putin drew attention to the systemic mistakes made by a number of countries, which led to the disruption of free trade in food products and provoked a significant increase in their price. Unlawful sanctions against Russia have exacerbated an already difficult situation,” the Kremlin press service said according to TASS. “Vladimir Putin stressed that Russia has been and remains a reliable producer and supplier of grain, fertilizers, and energy carriers, including to Indian partners,” the call readout said.

Meanwhile, Western populations are being told to ‘shut up and sacrifice’ for the indefinite foreseeable future…