In Huge Blow to Joe Biden, Manchin and Sinema Will NOT Kill Filibuster For Abortion Law 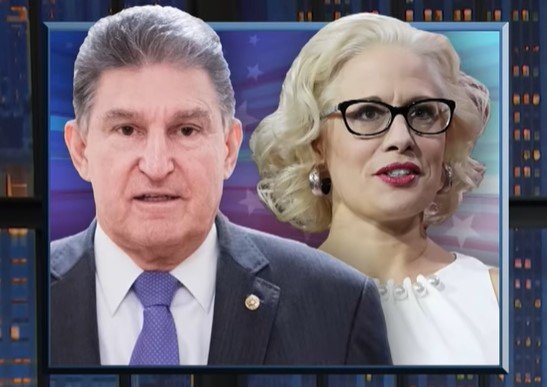 Joe Biden on Thursday launched a vicious attack on the Supreme Court at a post-NATO summit press conference in Madrid, Spain.

Joe Biden called the Supreme Court “outrageous” and “destabilizing” and called for suspending the filibuster in the Senate to allow passage of legislation legalizing abortion.

“And, so, I’m gonna be talking to, uh, to the governors as to what actions they think I should be taking as well and uh, but the most important thing to be clear about is, we have to change, I believe we codify Roe v. Wade in the law and the way to do that is to make sure the Congress votes to do that.”

Democrat Senators Joe Manchin (WV) and Kyrsten Sinema (AZ) have both reaffirmed they will not nuke the filibuster to ‘codify’ Roe v Wade.

“A spokesman for Manchin and an aide to Sinema, who both have opposed suspending the filibuster in the past, told Reuters on Thursday that their respective positions had not changed.” Reuters reported.

Last month Manchin and Sinema declared they would not kill the filibuster after a draft opinion showing the Supreme Court was going to overturn Roe v Wade leaked to Politico.

The draft opinion was leaked to the press – something that was highly unusual – in an attempt to switch the vote before it was announced.

The draft opinion was also leaked to put pressure on Sinema and Manchin to nuke the filibuster – but they are digging in their heels.

The post In Huge Blow to Joe Biden, Manchin and Sinema Will NOT Kill Filibuster For Abortion Law appeared first on The Gateway Pundit.