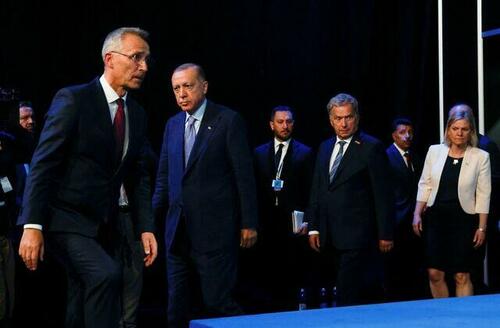 Turkish President Recep Tayyip Erdogan said Thursday that Sweden and Finland could still have their NATO bids blocked by Turkey if the Nordic nations don’t follow a memorandum that was signed earlier in the week.

Turkey lifted its objection to Sweden and Finland joining NATO after the three countries signed a 10-point agreement on Tuesday. Under the deal, the Nordic nations agreed to respond to Turkey’s extradition requests, lift export controls on Turkey, and not support Kurdish militant groups, including the PKK.

Erdogan said that if the deal isn’t followed, Turkey’s parliament could block their membership. “This business will not work if we don’t pass this in our parliament,” Erdogan said at the final day of the NATO summit in Madrid.

“First Sweden and Finland must fulfill their duties and those are already in the text… But if they don’t fulfill these, then of course there is no way we would send it to our parliament,” he warned.

What appears to be the most important issue for Erdogan is that Finland and Sweden agree to extradite suspected PKK members. He claimed Sweden agreed to extradite 73 people, although a leaked version of the memorandum did not say that.

“Sweden promised to give us these 73 people with this text. They may or they may not, we will follow that through the text and we will make our decision,” the Turkish leader said.

The Swedish government could come under intense domestic pressure over the deal with Turkey. The ruling Social Democrats recently survived a no-confidence vote that relied on the support of an independent MP of Kurdish heritage, Amineh Kakabaveh, who said the government agreed not to give in to Turkey’s demands for NATO membership.