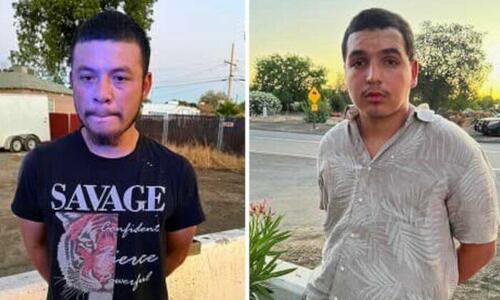 Authored by Lorenz Duchamps via The Epoch Times (emphasis ours),

Two drug traffickers who were arrested during a traffic stop in California last week after they got allegedly busted with 150,000 pills of fentanyl have been released back onto the streets, officials said.

Detectives arrested Jose Zendejas, 25, and Benito Madrigal, 19, both from Washington, during a fentanyl bust in Tulare County on June 24, the Tulare County Sheriff’s Office said in a news release.

The two were booked into the county’s pre-trial facility on charges of possession, transportation, and selling of illegal drugs.

In an update on Monday, the sheriff’s office said they “received a court order releasing both suspects from custody on their own recognizance.”

“We felt it necessary to clear up any confusion there might be about the release process when it comes to our jail system,” police said.

“All inmates booked into Tulare County jails are sent through what is known as the Risk Assessment Process through the Tulare County Probation Department,” it explained. “That ‘Risk Assessment’ is then sent to a judge with the court, who, then, determines whether or not the individual arrested is held on bail or if they are to be released.”

Police said although Mike Boudreaux, the sheriff of Tulare County, “strongly disagrees” with the judge’s decision to release the alleged traffickers, citing public safety concerns, his office is forced to comply with the court order.

Boudreaux told Fox News that “California’s system of justice is failing us all,” adding that he was “infuriated” after he found out about the release of the men. The network reported that Tulare County Court Commissioner Mikki Verissimo signed the order to release both men.

The confiscated drugs have a street value of around $750,000, as each pill sells for about $5.

According to a U.S. Centers for Disease Control and Prevention (CDC) report, fentanyl, a deadly opioid 50–100 times stronger than morphine, was linked to the most overdose deaths in 2021, with 71,238. Fentanyl is increasingly cut into other drugs to cut costs.

Some experts have noted that drug overdoses have been steadily increasing every year. However, in recent years, fentanyl, much of which is brought into the country via Mexican cartels from China, has triggered the recent spike in deaths.

Earlier this year, the Drug Enforcement Administration (DEA) issued a warning about a surge of fentanyl overdoses and mass overdose events.